So how exactly does a player like Ariela Lewis, a native of Anchorage, Alaska, get the opportunity to play college soccer at Alabama State?

“I was lucky enough to be discovered by coach Jodie Smith while playing at a tournament down in Las Vegas,” Lewis told TopDrawerSoccer.com. “It was one of a few tournaments that my team had been invited too. I'm guessing that our style of play must have sparked an interest from that tournament. It was amazing, considering that we were from Anchorage.”

Of course, finding out a college recruit is from Alaska, raises the next question about how popular the sport is up there. Lewis is far from the first native to play college soccer, and the game’s profile continues to rise.

“Soccer in Alaska is a big sport for everyone,” she said. “We have club teams for young beginners and then comp for teens, and even an adult league. It's nothing compared to our hockey fans here, but our soccer community is rather large and supportive of one another.”

Having the opportunity to play at the next level will not just be an adventure from Alaska to Alabama, but it will also be the realization of a lifelong goal.

“I decided to commit to Alabama State because my dream has always been to play at the D1 college level, and with a great school and promising soccer program like Coach Smith's, it seemed that those dreams would come true,” Lewis said. “I committed to soccer early as a kid and focused my attention to playing at the highest level possible. I love the competitiveness.”

To add to the further uniqueness of a soccer player heading across a continent, joining Ariela down at Alabama State is her twin sister Aaliyah Lewis, also committed to play there starting in 2013. 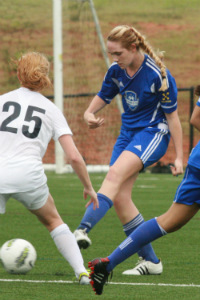 For Summer Edwards, the decision to attend the College of Charleston boiled down to a rather simple one: the soccer team’s coaching staff.

“The number one reason I committed to the College of Charleston has got to be the energy and excitement of Head Coach Christian Michner and Assistant Coach Tracy Chao,” Edwards told TopDrawerSoccer.com. “They are competitors but are really upbeat and high energy and it has always been a lot of fun to be around them at camps and games. I also like their style of play and the way I like to play fits in well with the team.”

A lot of people also rave about the school and location, and for Edwards, those two were obvious characteristics given the program’s backdrop.

“The campus is located in the historic section of Charleston and everything is within walking distance,” she said. “Of course, the city of Charleston is a wonderful place and, assuming I can find time, I will still be able to surf and go to the beach. It also doesn’t hurt that my family and friends can come see me play.”

Midfielder Dagny Olson, from Eclipse SC, committed to Illinois State for the class of 2013.

Kyla Kalinski, a midfielder for the Dallas Sting, committed to Louisiana-Monroe for the class of 2013.

Forward Alexandria Gambala, who played for Oxnard Community College, is committed to Cal State Dominguez Hills for next season.