The end of a lengthy recruiting process eventually brought Melanie Cea to one conclusion: that CSU Bakersfield was the right place for her next fall.

“By the end of my junior year, I prepared a list of schools that seemed like a good fit for me,” Cea told TopDrawerSoccer.com. “I received several emails from college coaches, but none more appealing than coach Gary Curneen's. After participating in CSUB's ID camp, I confirmed it was the right school and soccer program for me, which made my decision to commit easier than I thought.” 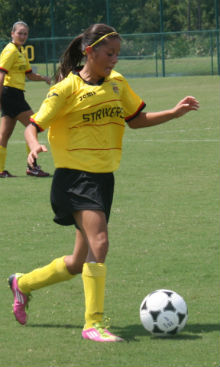 Head coach Curneen’s plan for the program impressed Cea, who liked his ambition and what they are worked towards.

“He has a clear vision of where he wants to take his team and is working hard to make his team successful,” she said. “I also watched videos of his training sessions and was impressed with how he develops his players. During the ID camp, one of coach Gary's players told me he has made a big difference on the team in the short time he’s been at CSUB. I'm confident that I will reach my full potential as a soccer player with coach Gary.”

Along with feeling like the soccer program was the right fit, the academics opportunities at CSU Bakersfield were also what Cea wanted in college.

“I was looking for a school with a small class size, good academic reputation, and an awesome location, and CSUB represents just that,” she said. “When I first came in contact with Coach Gary, I did a lot of research on the school before signing up for his ID camp. When I visited CSUB, it was everything I had imagined – I just felt that I belong there.”

Any Virginia defender is going to have to be able to play out of the back, and center back Kayla Morrison says that is one of her strong suits.

The team's style of play also drew her to commit to the University of Virginia, even after thinking for a long time she would play college soccer out of state.

“UVA’s style of play is one to two touch passing, tight defense, and attack minded,” Morrison told TopDrawerSoccer.com. “It suits me well as a player because I am very technical and can distribute the ball to my teammates easily. I have a very quick game, which is why I can see myself attacking the goal at Klockner Stadium in two years.”

Head coach Steve Swanson’s style flourished in particular last season, and him and his staff did their part to show Morrison that Virginia was the right place for her.

“The coaching staff is wonderful and they made me feel at home the first time I visited the school. Coach Swanson is an amazing coach who really cares about his players.”

Other commitments:
Midfielder Brooke Zenner (KC United) committed to Missouri State for the class of 2016.

Midfielder Karli Berry (Heat FC) committed to Cornell for the class of 2016.

Forward Alea Hyatt (Eagles SC) committed to North Carolina(w) for the class of 2017.

Defender Acadia Palocko (Internationals SC) committed to Stony Brook for the class of 2015.

Midfielder Josie Fowler (Michigan Hawks) committed to Marquette for the class of 2016.

Midfielder Lauren Roe (FSA FC United) committed to University of Scranton for the class of 2015.