During her search for the right college fit, Chole Maize was searching for that “good feeling” that would signal to her where she was supposed to be.

When she visited Georgia, the SEC program triggered the response that she was looking for during the recruiting process. 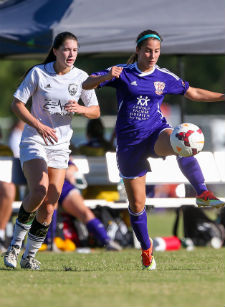 “Everything I experienced on my visit to UGA, from meeting coach [Steve] Holeman, the current players, and seeing all that UGA has to offer, told me in my heart that Georgia was the right place for me to become a student-athlete,” Maize told TopDrawerSoccer.com. “The whole atmosphere around the UGA campus is what I was looking for in a university. Coach Holeman and the current UGA players are such a fantastic group of people and players and I saw myself fitting in perfectly with the UGA women's soccer team both on and off the field.”

Maize, who is originally from Tennessee but plays for Atlanta-area club Tophat SC, was impressed by what the program had to offer and the local support.

“UGA's soccer facilities are tremendous and a great place to play college soccer,” she said. “I look forward to playing in front of the UGA home fans, which are some of the largest crowds in the SEC.”

Off the field, Georgia will also set her up for success as she works to earn a degree while playing soccer.

“The academics at UGA are exceptional and the support system that the university has in place for the student-athletes will allow me to achieve my academic goals and prepare me for my future profession,” she said.

Maize is one of the first Georgia recruits for the class of 2016.

An aggressive player at the back, High Point’s unique characteristics swayed Brooke Lazarus into making a commitment to the Big South program.

“Once you step on the campus, there’s no place like it,” Lazarus told TopDrawerSoccer.com. “It was love at first sight. Besides the coaching staff being incredible and the teammates extremely welcoming, the academics were exactly what I wanted and what I want to major in. It was a perfect fit.”

Lazarus cited the team’s close-knit vibe as a huge asset as well, as it is something she is used to experience playing youth soccer.

“From the first visit with Coach Marty Beall, I felt right at home,” she said. “At HPU, it’s exactly what I was looking for. They take it to the next level and you will have over 20 girls and coaches that you can call your best friends. It is one big family. It is important to me knowing that they are so close and always there for each other.”

ACL injuries can sometimes derail the most promising of careers. And Gina Davis has not had to endure just one, but three ACL surgeries since her freshman year of high school.

However, the defender managed to overcome that through patience and determination to make her commitment to Florida Atlantic.

“The main reason I decided on FAU is because of coach [Patrick] Baker and the rest of his staff,” Davis told TopDrawerSoccer.com. “What they're doing with the program is incredible, and I can't wait to be a part of it. He has a reputation for turning programs around and I definitely want to be a part of that turnaround at FAU.”

What Baker and the rest of his staff are doing to engineer a turn around at the Florida program was another factor in Davis’ decision.

“They are working hard to create a competitive yet family-like environment, which I think is very important,” she said. “I like that they want to stay connected to each player as an individual, and build a team around that aspect. I immediately knew my choice was made when I talked with coach Baker and coach [Michael] Crane.”

Midfielder Taylor Ryan (PDA) committed to Saint Joseph's for the class of 2015.

Midfielder Sarah O'Connor (Sockers FC) committed to Eastern Kentucky for the class of 2015.

Midfielder Marley Canales (San Diego Surf) committed to UCLA for the class of 2016.

Defender Callyn Walton (Challenge SC) committed to Texas A&M for the class of 2016.