A possession-oriented midfielder for Maryland United, Courtney Parr located the right blend of soccer and school at Michigan.

“Michigan is the perfect school for me,” Parr told TopDrawerSoccer.com. “I was focused on finding a strong academic university and Michigan is one of the top academic schools in the country. Athletically I will get the opportunity to play under three seasoned and successful coaches. The coaches have recruited a team of very talented players, who treat each other like a family. I am excited to get a chance to play for the coaches and with the players.” 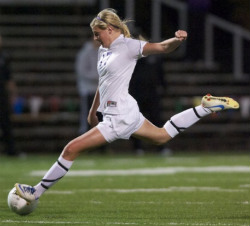 Parr offered up a couple of reasons why the soccer program really appealed to her, including the presence of head coach Greg Ryan and the rest of his coaching staff.

“First I know I will be able to reach my best soccer ability and truly improve with the help of these three incredible coaches,” she said. “Secondly the facilities that I will have the opportunity to play and train on are extremely impressive. And last the girls on the team were a tight knit group of very nice, fun girls who I look forward to playing with them.”

Academically, Parr also found the right fit with her preferred course of studies.

“Michigan is ranked as having one of the top business programs in the country,” she said. “I intend to be a business major, which makes Michigan that much more exciting and a perfect choice for me. Of course I also loved the gorgeous campus and the town of Ann Arbor.”

Having played soccer since she was four years old, Madison Reynolds will continue playing at the next level for the newly minted Division I program at Grand Canyon.

“I am so excited about playing at GCU in the future,” she told TopDrawerSoccer.com.  “The first time I visited and toured the campus I got to meet some of the coaches and that’s when I knew this is where I wanted to be. I felt so comfortable with coaching staff and had such a great feeling about the campus, it just felt so safe and secure.”

Along with her desire to keep playing soccer, Reynolds also found that GCU offers the career path she hopes to pursue.

“I already knew that the school itself would be a great fit as they offer many programs that will fit with my ultimate goal of being a firefighter or paramedic,” she said. “I am ready for the next level of Soccer and also the next chapter in my life.”

Midfielder Shannon Flowers (Albion Hurricanes FC) committed to UTEP for the class of 2015.

Midfielder Katherine Byrne (Albion Hurricanes FC) committed to Pepperdine for the class of 2015.

Forward Kimberly Hazlett (Crossfire Premier SC) committed to Portland for the class of 2016.

Midfielder Haley Berg (Dallas Texans) committed to Texas for the class of 2017.