In this week’s commitment update, girls from all over the country discuss making the right choice, what made them fall for their schools, and the little things in recruiting.

A midfielder for the Colorado Rush, Rebecca Rasmussen found a number of things she liked about her college of choice.

“The friendly, knowledgeable coaching staff, the great soccer facilities, the beautiful campus and the town of Athens tipped the scales in favor of Georgia,” she wrote TopDrawerSoccer.com in an email. “Georgia's a big campus, but its beautiful landscaping and architecture makes it feel very intimate and people-friendly.”

The attacking midfielder also raved about the style of play the Bulldogs implement, which she thinks isn’t too far from what she’s used to with the Rush. She’s excited to continue with that, along with working with the staff and trying to find success.

The coaches at Georgia are supportive and excited about helping me continue to develop as a player, and I'm looking forward to helping Georgia make a run for a national championship,” she said. 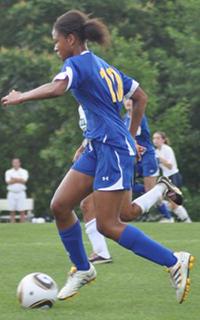 Dorsey, a striker in the Top 10 of the 2014 rankings said her commitment boiled down to the comfort level she experienced during a visit to Duke’s campus.

“When I visited, it felt so natural being there,” she wrote TopDrawerSoccer.com in an email. “I could really picture myself there. Also, the coach, team, and environment were amazing. I really felt welcome and wanted.”

A talented attacker with numerous youth national team call ups on her resume, she’s eager to hone her abilities and grow as a player at the next level.

“[I’m look forward to] playing with and against some of the best players in the country who are 3 or 4 years older than me,” she said. “The speed of play and competition is so inspiring. I can't wait to be apart of that.”

Alexandra Bruder has put in the work on the soccer fields, and when it came to college, she put in just as much work in making the right decision.

“In the beginning of my freshman year, I started researching different universities,” Bruder told TopDrawerSoccer.com. “I gathered information on class sizes, my major, did they have a soccer team, did I like the coach and most importantly, would I want to attend this school if something ever happened to me and I couldn’t play soccer.”

All that research and time spent talking to coaches eventually led the ECNL standout to pick the University of Southern California.

“USC was the one school that every person I spoke to said, if they had to do it all over again, USC would be the first choice once again!”

The talented player on the field is also a superstar in the classroom with a 3.76 GPA, and has career ambitions of becoming a heart surgeon.

“USC has one of the top medical schools in the country,” Bruder added. “I am very interested in medical research and USC is the leading private research university in the country. I sat in on Professor Richard Block’s class and I was very impressed with the class.”

Legacy also played a part in her decision. Bruder revealed that her mom graduated from USC.

“My mom graduated from USC and the alumni network is unbelievable,” Bruder exclaimed. “I have a strong connection with my family and I’ve realized that becoming a Trojan is joining a very strong family.”

In Brduer’s immediate family, she has two younger sisters who are also soccer players and she is happy they will have the chance to see her play in college.

She is the first verbal commitment for USC’s 2014 class.

College coaches should take note: it is the little things that count when recruiting players.

Nicole Miyashiro, a starting midfielder on one of the top teams in the country, cited the late night cookie delivery from Insomnia, as the clincher for her in selecting Ohio State University.

Of course, she also put careful consideration (beyond the deliciousness of freshly baked cookies) into the academics and athletics as well with the Buckeyes.

“I felt that the Ohio State University was the right fit for me for a bunch of reasons,” Miyashiro told TopDrawerSoccer.com. “Academically there are a ton of different educational opportunities to choose from. I will be focusing on getting accepted into one of their honors programs. As far as the soccer program and school spirit, it doesn't get any better than OSU!”

Leaving California is usually a tough decision for teenagers who have grown up in the land of sun and movies, but Miyashiro said she always knew she wanted to head east for college.

“I always knew I wanted to go to college out of state and most of my college search was for colleges on the each coast,” Miyashiro revealed. “So committing to an east coast college was the easiest part of the college recruiting process for me.”