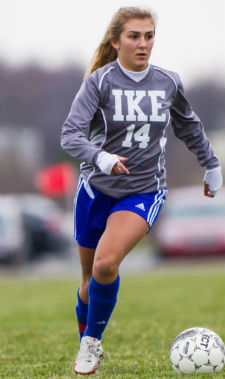 “I visited several colleges over the past year and knew right away that Villanova was the ideal university for me to pursue my academic and soccer goals,” Casey said. “Coach Fran and Coach Kristin welcomed me to Villanova and when I met the team, I knew that something special was underway with Villanova women’s soccer.”

Shannon displays creativity in the final third, and her technical ability allows her to both generate and finish scoring opportunities in the final third. She finished the ECNL season as one of the top scorers on her club team with seven goals and four assists.

A combination of factors helped her pick the Pennsylvania school.

“Villanova has such a strong academic and athletic tradition and the opportunity to obtain my educational objectives, combined with the aggressive plans to build the women’s soccer program into a top contending team, were the deciding factors,” she said. “Villanova is building two new soccer fields and I am really excited to join the Villanova family when I graduate in 2016.”

Casey is the fifth verbal commitment to Villanova for the class of 2016.

What trigged Ainsly Wolfinbarger to make the decision to head to Florida to play college soccer?

A variety of factors pulled her to the ACC program.

“I decided that the University of Miami was the right place for me based on the combination of their prestigious academics, the opportunity to play in the ACC, and the overall feeling of home that it gave me above other schools I had visited,” she told TopDrawerSoccer.com. “I love that the University of Miami fully commits to preparing their students for the future and I also thoroughly enjoy the feeling of community it provides.

A distant tie to current head coach Mary Frances Monroe, who is entering her second season in charge of the Hurricanes this fall, played another role in the choice.

“I look forward to playing for Coach Monroe after I had the pleasure of having her as my coach at my very first national camp for U14,” Wolfinbarger said. “I have confidence that she not only will be great for advancing the program, but also for developing and bettering me as a player.”

This has been Wolfinbarger’s first season playing for the Dallas Sting in the ECNL, and it’s already helped her improve her game, preparing her to compete in the rigors of the ACC.

She saw similarities between the Sting and the way Miami likes to play as well, making the commute from Oklahoma to Dallas to compete worth her while.

“As a team we set the bar high at the very beginning of this season and we’ll stop at nothing to achieve our goals,” she said. “We find success because we are never satisfied and we always seek to improve. Playing with Sting has significantly helped prepare me for my collegiate career. I am extremely grateful for my two coaches, Tatu and Randy, who have pushed me outside of my comfort zone this season and in turn have made me a better player because of it.”

Goalkeeper Madison Less (Ambassadors FC) committed to Cincinnati for the class of 2016.

Defender Cassidy Griffith (PDA) committed to Loyola (MD) for the class of 2015.

Midfielder Alexandra Soree (Boca United FC) committed to UCF for the class of 2016.

Goalkeeper Kaylie Collins (Mustang SC) committed to USC for the class of 2016.

Defender Jill Richards (Florida Kraze/Krush) committed to Elon for the class of 2015.

Defender Elizabeth Sieracki (Concorde Fire SC) committed to Virginia for the class of 2016.