Growing up with a brother and an English father, Hailey Merrill learned the value early on how to be physical on the soccer field. 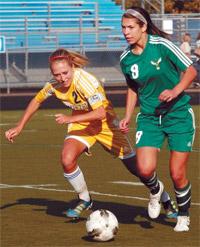 The defensive midfielder is a ball-winner who decided to verbally commit to Loyola-Chicago after a thorough search process.

“I looked at a lot of schools, but I had the chance to visit Loyola twice during my college search process, and really liked what I saw,” Merrill told TopDrawerSoccer.com.

One of the many things that she liked about the school with the high bar the program sets for its athletes.

“It felt like the team strives for excellence both on and off the field. I also liked Coach [Barry] Bimbi’s emphasis on ‘family’ and the way team members seem to support each other and work hard to improve,” she said. “There’s a sense that Coach Bimbi is building a strong program for women’s soccer at Loyola.”

Both the location and the size of the school also drew her to the program, not to mention that she felt like it places an emphasis on the “whole person.”

Add in to the fact that she won’t be too far away from home, and it’s a pretty sweet deal for the standout from Minnesota.

“I also like that Loyola is close enough for my parents and brother to visit from time to time,” she said.

Another aggressive midfielder, Victoria Martinis is heading to Louisville, and for her, it was looking like her likeliest destination from the beginning.

“When I first stepped foot on campus, I felt very comfortable,” she told TopDrawerSoccer.com. “The coaches were awesome. They made me feel at ease. Staying with the players and getting to know them showed me the type of character they are looking for in the athletes they recruit. I knew I fit in.”

While the Cardinals aren’t a powerhouse, the team itself has been trending upwards, coming off a strong year despite not making the NCAA tournament. The potential Martinis sees there was another alluring feature.

“Louisville program is on the upswing,” she said. “It’s a highly competitive soccer program with expectations to win the conference and make the NCAA playoffs every year. That's the program I want to be associated with, playing great competition. Coach Karen Ferguson-Dayes and staff are great at what they do and expect a lot out of you.”

Kyla Kalinski, from the Dallas Sting, committed to Louisiana-Monroe for the class of 2013.

Rebecca McGrath, a forward for Seacoast SC (New Hampshire), committed to Presbyterian for 2013.