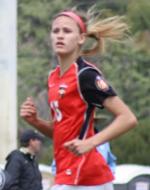 From the academic standpoint, making the decision to commit to Virginia isn’t that challenging – and it played a strong part in PDA midfielder Montana Sutton electing to attend the ACC power.

“UVA is one of the best schools in the country,” she told TopDrawerSoccer.com. “Both the interesting history behind the school and the beautiful setting helped make my decision easy.”

Of course, the school has a lot going for it on paper, but it’s always good for recruits to do their homework and pay a visit to the campus in Charlottesville. That only continued to sway Sutton, as she also was enthralled with what she found up close and personal.

“Something clicked when I visited,” she said. “I love the school, and I love the soccer program. It just felt right. Coach [Steve] Swanson, coach [Ron] Raab and the rest of the coaching staff made me feel at home. Once I was there, I did not want to leave.”

Getting a chance to see the amenities Virginia offers its soccer team surely sealed the deal.

“The soccer facilities are some of the nicest I have seen,” she said. “Klöckner Stadium has a large, awesome surface, which is perfect for the possession game.”

Proximity to family is always something recruits must consider. And for Eva Buechler, it was one of the factors in her decision to commit to a California school.

“I chose Pepperdine because I wanted to stay on the west coast and be close to my home,” she told TopDrawerSoccer.com. “I'm very excited to be a part of the Waves program. I really like Tim [Ward] and Twila [Kaufman] as people and I think they are going to be great coaches.”

Along with the proximity to home, Buechler couldn’t say no to playing home games along the Pacific Ocean, not to mention the campus’ Malibu, CA location. Add to that she feels like the transition to the team won’t be too challenging, and it helped her make up her mind.

“Their style of soccer fits me very well,” she said. “I have always wanted to be a part of a program that is consistently in the top 25. It's my goal to help the Waves get to the next level.”

Another player making the decision to not stray too far from home, Hannah Bricker found the right blend of college criteria at Denver.

“I had the opportunity to visit and tour other schools over the last year and knew right away that DU was a right fit for me with my education requirements, winning soccer program, and the great campus environment,” she told TopDrawerSoccer.com. “Also, after considering other schools out of state I realized I wanted to stay in state as Colorado has so much to offer.”

Staying close to home was just part of what went into her decision, as she was obviously also impressed with the soccer program – from the coaches to the recent results.

“I am very excited about playing for coach [Jeff] Hooker and his coaching staff as their coaching philosophy and style of play fits me very well,” Bricker said. “I also was very impressed with their facilities and most of all the team chemistry. I know I will have the ability to continue to grow and develop as a soccer player at DU. They also are very competitive and them making it into the Round of 16 for the 2012 NCAA Championships was great to see for the entire program.”

Goalkeeper Jalen Tompkins (Sereno SC) committed to Colorado for the class of 2015.

Forward Kirstin Robertson (Tennessee SC) committed to Austin Peay for the class of 2014.

Forward Courtney Coffey (Colorado West) committed to Denver for the class of 2015.

Forward Amanda Vocelka (Gwinnett Soccer Association) committed to Villanova for the class of 2014.

Midfielder Sarah McCauley (Connecticut FC) committed to Yale for the class of 2014.

Defender Kylie Ross (Dallas Texans) committed to Baylor for the class of 2015.

Forward Tayler Jamison (FC Delco) committed to VCU for the class of 2014.

Midfielder Ashley Lowe (Central Florida Krush) committed to Elon for the class of 2014.

Midfielder Morgan McGarry (Mustang SC) committed to Arizona for the class of 2015.

Midfielder Kennedy Kieneker (Crossfire Premier SC) committed to Arizona for the class of 2015.