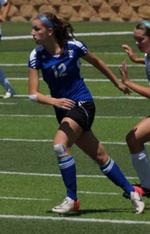 A promising central midfielder from Texas, Mary Heiberger jumped at the chance to join a rising Red Raiders team.

“I loved everything about the Texas Tech soccer program,” she told TopDrawerSoccer.com. “The awesome coaching staff and talented, welcoming players and the amazing facilities. They even have a soccer-exclusive indoor soccer field.

“Texas Tech's style of play suits me perfectly and I love Tom Stone's coaching methods and his great personality. I feel like my game will grow and improve at Tech. Also, The town of Lubbock really supports the soccer team and fills the stands for every game. Playing against such great competition in the Big 12 is another bonus. The whole program felt like a perfect fit and I couldn’t be happier.”

Her options in the classroom also intrigued her, not to mention the school’s location.

“Texas Tech has a great nursing and allied health program which is my area of interest,” she said. “The size of the school is what I was looking for and it's in Texas! Plus, I love the friendly people of Lubbock and the size of the city. It’s a great college town. I'm very excited to be a Red Raider!”

In Arizona, Elaine Burdett found the right fit of a school that will push her on and off the field.

The Wildcats compete in an extremely difficult soccer conference, but Burdett is confident that the current coaching staff has things headed in the right direction to be very competitive.

“They are in a big time conference being in the Pac-12, and coach [Tony] Amato is committed to building a nationally ranked program,” she said. “I want to be a part of that. I want to help build that legacy. I also like the staff Coach Amato has put together. I am excited to begin training with coach [Paul] Nagy and coach [Kylie] Louw. The team has a great energy around it.”

The school’s support of athletics also drew her attention when sifting through her college options.

“It has a proud athletic tradition in all sports and I am looking forward to going to the football and basketball games,” Burdett said. “It is also a very good academic school and a degree from the U of A carries some weight.”

Forward Chloe Fifer (FC Dallas) committed to Abilene Christian for the class of 2014.

Defender Abbey Porter (Eastside FC) committed to Washington State for the class of 2015.

Midfielder Madison Stark (Legends FC) committed to Arizona State for the class of 2014.

Forward Michelle Xiao (Gretna Soccer Club) committed to Stanford for the class of 2015.

Midfielder Sarah Swafford (Concorde Fire) committed to VCU for the class of 2014.

Defender Sutton Edwards (So Cal Blues) committed to Eastern Kentucky for the class of 2014.

Midfielder Kylie Kirk (PDA) committed to Indiana for the class of 2014.

Defender LeAnne Davis (FC Revolution) committed to Monmouth for the class of 2015.

Forward Sarah Segan (FC Revolution) committed to William & Mary for the class of 2015.