PDA, a club based in New Jersey, is known for churning out Division I talent on a regular basis. 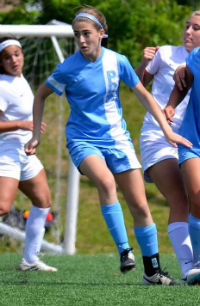 The latest player to make her college commitment is Maddie Temares, a midfielder standout with good vision that looks to pass and distribute the ball.

The New Jersey native won’t stray too far from home, heading to an Ivy League program in New York City.

“Columbia was my first choice of schools,” Temares told TopDrawerSoccer.com. “The coaching staff, academic offering, and location were the perfect fit for me.”

Staying in the Northeast was a central characteristic to her college search, and the program’s style of play and staff were both standouts to Temares.

“I was very impressed by the personalities and passion of the coaching staff,” she said. “Also, I believe the team is committed to playing a strong possession game and controlling the play.”

And the Ivy League education was obviously a factor.

“The school has very strong academics, and being in New York City and close to home were wonderful benefits,” Temares said.

Three players are currently committed to join Columbia in 2016.

The first verbal commitment to Army for 2017, Erynn Johns has the distinction of becoming West Point’s earliest recruits in the program’s history.

“I chose West Point because it really has the best academic program for the field I want to study,” Johns told TopDrawerSoccer.com. “Additionally, the educational experience at West Point brings so much more than your average college experience where qualities like leadership, teamwork and integrity are stressed.”

Playing for a female coaching staff was also important to Johns.

“West Point really has the best female coaching staff I encountered on my search for a top shelf school,” she said.

Midfielder Ireland Dunn (Utah Avalanche) committed to Utah for the class of 2016.

Midfielder Emily Sands (Penn Fusion) committed to Penn for the class of 2016.

Defender Amanda Wilson (Maryland Rush) committed to Villanova for the class of 2016.

Defender Alex Barber (So Cal Blues) committed to Middlebury for the class of 2015.