After suffering an ACL tear last year, the road to recovery has been a long and challenging one. And it also helped Kayla McCoy determine what to value during her college search. 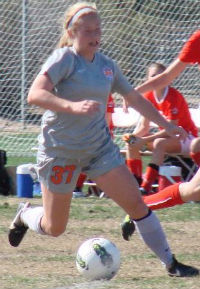 “Because of my injury, my college recruiting process was different than I had planned,” she told TopDrawerSoccer.com. “My parents encouraged me to focus on the schools that were willing to make a commitment to me without needing to see me play again. That list of schools seemed small, but Duke was one of those schools. Their incredible academics, fantastic coaches, and beautiful campus sold it for me.”

A forward with an array of weapons up front, McCoy found plenty of things she liked about the school’s soccer team, one of the perennial powers in the daunting ACC.

“Besides being a highly ranked soccer program, the Duke program has a history of excellence,” she said. “The coaching staff is phenomenal and very experienced, and I really liked the team. The competitive atmosphere is great, and the University also shows a lot of support for its women's soccer program. I see myself both being able to help the team, and grow individually as a player at Duke.”

Her Eclipse Select SC squad heads into this weekend’s ECNL action as the top seed in the U16 age group, and they’ll be looking to extend the season a bit further and punch a ticket to the National Finals in Richmond.

For McCoy, simply being back on the field has been an amazing feeling.

“Because I was out for so long, I came to realize just how much I loved to play and how much I missed it,” she said. “Coming back now I have a whole new appreciation and love for the game that I did not have before. I no longer take the game of soccer for granted, and I enjoy every minute I have been blessed with the opportunity to play. I am not where I want to be yet, recovery-wise but feel like I am making great progress.”

It didn’t take much for the Heat FC standout to take notice of what the university had to offer her with its soccer program.

“Ohio State is a great school with an outstanding academic reputation,” she told TopDrawerSoccer.com. “They also have a deep and rich athletic tradition. I knew as soon as I walked on campus that I wanted to be a Buckeye.”

Along with the school’s all-around athletic prowess, it was also the coaching staff that drew her interest.

“The program, led by Lori Walker, is first rate,” she said. “Lori and [assistant coach] Jason Goodson impressed upon me that a strong work ethic and hard work on the practice pitch drive the team's success in games. I just loved their approach to the game.”

The hiring of Mary-Frances Monroe as the new head coach at Miami (FL) has already helped the program land one recruit, as Niccola Venezia cited her presence as the deciding factor.

“She was my regional coach so I have known her for a few years and she has been a great mentor to me,” Venezia told TopDrawerSoccer.com. “I was deciding between a few different schools and after I found out she was the new coach, I knew the University of Miami was the perfect fit for me. I wanted to go to a team where I could contribute, along with become a better player, and I know she will push me to my full potential just as my club coach Jaime Gonzalez did.”

Of course plenty of other aspects of the school piqued Venezia’s interest: the school’s academics, location (south Florida is a nice place to be) and the caliber of competition.

“What I like about the soccer program is that it is in the ACC and will be competing against the best soccer programs,” she said. “I believe Mary-Frances will make the program even stronger. I look forward to playing at the highest level and at the same time working hard academically.”

Forward Christina Settles (West Coast FC) committed to Pepperdine for the class of 2015.

Midfielder Katie Pingel (So Cal Blues) committed to Santa Clara for the class of 2016.

Defender Amanda Tredway (Penn Fusion) committed to Old Dominion for the class of 2015.

Goalkeeper Brittany Wilson (Real Colorado) committed to Denver for the class of 2016.

Midfielder Shelby Fredericks (Massapequa SC) committed to Northwestern for the class of 2014.

Defender Sarah Danielle Hoover (TSC Hurricane) committed to Tulsa for the class of 2015.

Forward Jordan Neiheiser (Quakertown United) committed to York (Pa.) for the class of 2013.

Forward Mikayla Smith (FC Delco) committed to Indiana for the class of 2014.

Defender Grace Hancock (FC Nova) committed to Washington State for the class of 2015.

Forward Erin Hughes (Massapequa SC) committed to Villanova for the class of 2014.

Defender Aliza Van Leesten (Connecticut FC) committed to Colby for the class of 2013.