Penn Fusion’s ECNL season is about to start in mid-December, and Meghan McCool will go into the campaign with her college future decided.

The quick, hard-working attacking player will take her talents to Virginia in the fall of 2016 after a thorough search that was decided during a visit to Charlottesville.

“Before UVA, I visited 5 or 6 other schools so I kind of knew what I wanted – not only in a soccer program, but in a school and campus,” McCool told TopDrawerSoccer.com. “On my first visit to UVA, I quickly felt that everything was right.”

From Klockner Stadium to the coaching staff, the PA youngster found that the soccer team had plenty offer – unsurprising when considering how well the 2013 season has gone for the squad.

“I loved everything about the soccer program, but what first impressed me was the amount of time coach [Steve] Swanson spent with me on my visit,” she said. “I felt like he wanted to get to know me as a person, as well as a player. The entire coaching staff and all of the players were also super nice and the soccer stadium is the best.”

With college still a few years away, McCool hasn’t elected to pick her academic path, but knows that the school itself has the options to set her on a path that will lead to success off the field.

“At this point, I don’t really know what I want to study, but UVA has so many incredible options,” she said. “I know that when I graduate, I will have a degree form one of the best schools in the country. I also like the historic feel of the campus, the friendliness of everyone on campus, and that it is only 4-5 hours from home.” 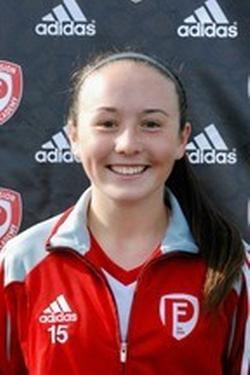 Count Ashlyn Kearney as one of many players who took advantage of her youth soccer travels to scout potential schools.

The long road – over 20,000 miles in the car and 5,000 in the air – eventually led her to make a commitment to a promising program in the Carolinas.

“Being part of ECNL and various levels of ODP, I was fortunate to have opportunities to visit with some of the best schools in the country,” she told TopDrawerSoccer.com. “I quickly found myself on an incredible journey over the past year to many different schools in various states, in conferences from ACC, SEC to the Big East, but was immediately drawn in by a unique opportunity to be part of something special at High Point.”

While the school may not be as well known for its soccer program as others in the region, Kearney was drawn in by the possible opportunities for playing time, as well as writing a new chapter in school history.

“High Point continues to gain national academic prominence; its athletic programs, including both its women’s and men’s soccer, are also gaining national recognition,” she said. “The opportunity to play for a team on the rise and have an immediate impact really appealed to me. I see a lot of potential in HPU's women’s soccer team.”

The promise was one thing, but Kearney also liked the vision and leadership she saw in the coaching staff.

“Along with HPU’s unique educational environment and incredible campus, I’m also really looking forward to play for coach Marty Beall and coach Brandi Fontaine,” she said. “They were so great to work with through my recruiting process, and my unofficial visit where I got to spend time with them and the team really sealed the deal. I can absolutely see why coach Marty was named Big South Coach of the Year.”

Midfielder Gabrielle D'Alesandro (D’Feeters) committed to McNeese State for the class of 2014.

Forward Emma Wangsness (MVLA) committed to Ohio State for the class of 2014.

Midfielder Melissa Pagoaga (Gwinnett Soccer Association) committed to Auburn for the class of 2015.

Midfielder Emily Kaestner (Challenge SC) committed to Oregon for the class of 2016.