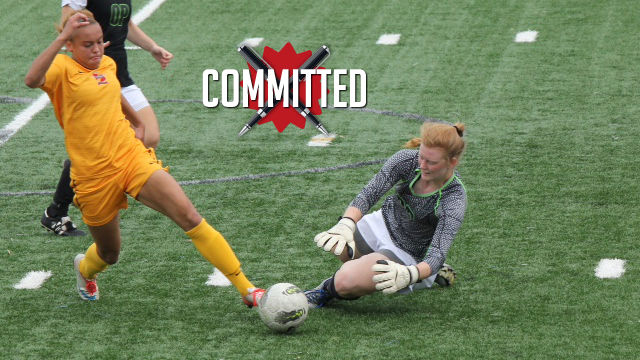 Over the past five years, Aubrei Corder has been commuting three hours each way from her West Virginia home to train and play with Ohio Prmier in the ECNL. 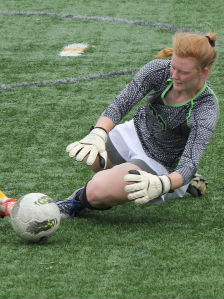 That’s not the only unique trait to her commitment story, as the former forward is now a full-time goalkeeper, and standing at 6-feet tall, possess the size to excel at the Division I level.

She’ll head to the Midwest in a couple years to begin her college soccer career at a rising Big Ten power.

“I have looked at several programs and was most impressed with Nebraska's philosophy on developing the overall player and not just trying to recruit bodies,” Corder told TopDrawerSoccer.com. “They are as much concerned about the ‘person’ as they are how well they can play soccer. Coach Marty Everding has a lot of experience and history with developing top level goalkeepers and that's what I want to be. I know that he can help me achieve that goal.”

Corder was obviously struck by the way the program looks to improve the play on and off the field, and the coaching staff’s approach left a big impression on her.

“I like the core values that Coach Walker and his staff have been able to implement into the program,” she said. “I know that this is why they are able to achieve the success they do. They don't put the emphasis on having to win but rather doing what’s been taught and playing hard. The results will take care of themselves when you do these things.”

There were aspects about the school that also reassured her about going to school relatively far from home.

“Nebraska has some unbelievable community support for their school,” she said. “It gave me the sense of being at home despite the fact it's over 900 miles away. The campus and town are beautiful with the facilities being among the best in the nation. The academics are also top notch and will equip me with a great education when I leave there.”

Corder is the third reported verbal commitment to Nebraska for the class of 2016.

Like every other elite travel soccer player, Emilie Kupsov spent a lot of time on the road traveling to tournaments around the country. While on her travels, she had the chance to stop by and see several different schools.

It was a path that eventually showed her what she wanted in a future school, ultimately leading to a commitment to a small school in Virginia.

“It became pretty clear to me that I was looking for a small suburban college with good academics,” Kupsov told TopDrawerSoccer.com. “Academics are very important to me and the Lancers soccer schedule helps keep me in the classroom and off the road. It was also important for me to be able to play soccer as a freshman. When I went to visit Longwood University I knew right away this was a perfect fit for me. It’s a nice town and the people are very friendly down South.”

It wasn’t just the school that convinced her, as the team’s coaching staff played a decisive role as well.

“The first time I met coach Todd Dyer I knew I wanted to be a Lancer,” she said. “He had taken a personal interest in me. He recalled games I had played in years earlier. Some things I didn’t even remember. Another factor for my decision was that coach Todd Dyer’s coaching style doesn’t differ much from my current head coach Stefan Szygiel. They both want what’s best for the team.”

Midfielder Ashley Sanchez (So Cal Blues) committed to UCLA for the class of 2017.

Midfielder McKenna Ferrera (Washington Premier FC) committed to Mercer for the class of 2015.

Midfielder Kendall Higgs (Boca United FC) committed to Pittsburgh for the class of 2017.

Midfielder Rylie O’Keefe (Colorado Rush) committed to Tennessee for the class of 2015.

Forward Danielle Morris (Heat FC) committed to Montana for the class of 2015.

Midfielder Alizah Johns-Boehme (Bethesda SC) committed to Villanova for the class of 2015.

Forward Morgan Hensley (Sporting KC) committed to Missouri State for the class of 2016.

Midfielder Bridgette Andrzejewski (Premier SC) committed to North Carolina for the class of 2016.