One of Pennsylvania’s top players from the class of 2017, Shea Moyer is staying in state after making her verbal commitment to Penn State. 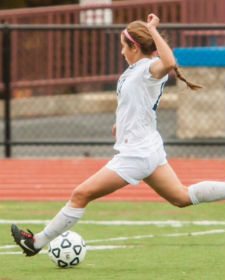 “I decided to commit to Penn State because it's just the perfect school for me. It's been my dream to play there since I was a little kid and I know that surrounding myself with Penn State's coaching staff and incoming recruiting classes will give me the best opportunity to continue to develop as a player. I couldn't picture myself going anywhere else.

A central midfielder and playmaker, Moyer thinks that she’ll be a good fit for the way the team likes to play the game.

“Penn State is a possession-oriented team with a lot of skillful and crafty players, and I feel as though their style of play suits me,” she said. “Also, the relationship Erica, Ann, and Tim have with all of the players creates a family atmosphere, and I can't wait to be part of that family.”

Moyer also knows that her commitment will help her in the classroom, and she’ll be taken care of academically.

“Penn State has strong academics, a beautiful campus that is fairly close to my home, and it has the large, diverse student population I was looking for,” she said.

She’s the third verbal commitment to Penn State’s 2017 class, joining the No. 2 recruit Frankie Tagliaferri and the No. 8 ranked recruit Emma Thomson.

Every time she steps on the field, Alyssa Hinojosa is always determined to work hard for her team.

She’ll take that mantra to the Pac-12 in a couple of years.

“I committed to Oregon because it was a place where I knew I was going to be happy as it has everything I was looking for in a college,” Hinojosa told TopDrawerSoccer.com. “I also wanted to be a Duck because I wanted the opportunity to contribute to coach Mertz’s plan to build the program into a Pac12 and national contender. I feel honored that the staff believed in me, and recruited me to be a part of this plan to achieve this goal.”

At Oregon, Hinojosa discovered a campus that has all the resources in academics and athletics she needs to be successful.

“The school itself is extremely spirited and it was also special to find that all over Eugene there is a feel of pride and support for the university and the athletic department, as everyone owns something with the ‘O’ on it,” she said. “As I will be away from home the spirit and family feeling from the college was also a big part of my decision making process.”

She’s also hopeful that she can improve as a player once on campus in Oregon.

“I am also looking forward to play for, and continue to grow under the guidance of the coaching staff,” Hinojosa said. “I like the style of soccer the team is playing, as well as the way they have shaped their current players to be determined and hardworking individuals.”

Midfielder Juliana Mascelli (NJ Crush FC) committed to Fordham for the class of 2016.

Goalkeeper Rebecca Rodriguez (Heat FC) committed to Dixie State for the class of 2015.

Midfielder Haillie Lower (West Florida Flames) committed to Florida for the class of 2016.

Defender Kayla Robinson (Sockers FC) committed to Cornell for the class of 2015.

Midfielder Julia Panko (FC Bucks) committed to Columbia for the class of 2016.

Defender Adriana Kuryla-Santos (PDA) committed to Columbia for the class of 2016.

Defender Alexandria Silva (Mustang SC) committed to Navy for the class of 2016.