Reema Bzeih, an outside defender, made her commitment earlier this month and she decided to stay close to home with UCLA. 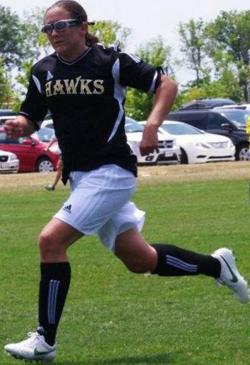 “The reason I picked UCLA was that I wanted a school that not only had top academics and top soccer but a school that would challenge me and motivate me to become the best I can be,” Bzeih told TopDrawerSoccer.com. “I was drawn to the Bruins because I was extremely comfortable with the campus, coaches, environment and the idea that I could possibly be there in the future.”

UCLA head coach B.J. Snow has made a big push to keep the top local talent with the Bruins, and with Bzeih, he adds an outstanding defender with ODP experience.

“Location, in the matter of being close to home, was an important factor for me,” Bzeih added. “Weather wasn't really a priority for me . . . but I do admit, as a former Michigan resident, I don't mind having the perfect Southern California weather at all!”

The West Coast FC standout also considered California, Santa Clara, Pepperdine, and others before verbally committing to the Bruins.

The amenities that Indiana athletics had to offer Nicole Zuckerman was a prospect she couldn’t turn down.

That, along with numerous other factors helped her make the decision to verbally commit to become a Hoosier.

“Indiana had everything I was looking for in a college: a beautiful campus, great academics, and amazing athletic facilities,” Zuckerman wrote TopDrawerSoccer.com in an email. “Indiana has the largest weight room in college athletics. How can any athlete say no to that?”

Along with the school itself, Zuckerman thought that the distance was just the right mix away from her native Michigan, giving her parents the option of catching her in action.

“I knew I wanted to stay in the Midwest and Indiana is a perfect distance away from home,” she said. “Far enough so I feel independent but close enough for my parents to come to my games.”

Christa Szalach, a midfielder for Sockers FC found everything she was looking for in a college program at Purdue, where she recently made her verbal commitment.

“I have always wanted to go to a big school where I can play soccer and have the option of enjoying other great sports teams too, and Purdue was the perfect place for me to do that,” she wrote TopDrawerSoccer.com in an email.

“It has a strong academic program so I know I will get a high quality education as well as a great soccer experience so this seems to be the perfect fit for me! Also, the coaches are great and I really liked what they had to say about how they run the program. For me, it's nothing but positives for attending Purdue!”

Along with the lure of the books, Szalach really likes the way head coach Robert Klatte approaches the game.

“I really liked Purdue's style of play,” she said. “It seemed to me like it's more of a possession oriented program and I feel like that's the type of soccer that fits me best.

“The girls on the team seem really nice and it's an environment that I feel like I will fit into very well. Coach Klatte is a great coach and seems to understand his players.”