Few players in elite girls club soccer can match the meteoric rise that Jessie Fleming’s experienced over the past year and a half.

From a standout performance at the 2013 U17 CONCACAF Championship to a full debut last December for the full Canadian National Team, Fleming is one to watch for the present and future. 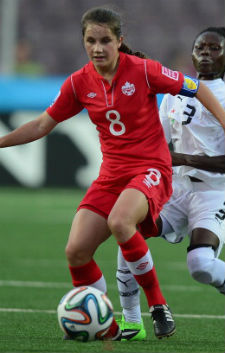 In a couple of years, she’ll take her talents to Westwood, and study under Amanda Cromwell and the vaunted UCLA women’s soccer program.

“I absolutely love the culture of excellence around all UCLA athletics and academics,” Fleming told TopDrawerSoccer.com.

While the Bruins are licking their wounds from last weekend’s loss against Virginia, its freshmen class in 2016 could already be the best in the nation. No. 1 ranked Mallory Pugh and No. 2 ranked Marley Canales previously committed to bolster the program’s ranks that year.

Playing with the likes of Pugh and Canales was just one of a slew of reasons that Fleming pledged to join it.

“The program includes an excellent coaching staff, a history of success, great facilities and a style of play that really suits my game,” she said. “The UCLA program continues to attract numerous players with national team experience (from various countries), making it an unbelievably competitive environment - much like great teams such as Barcelona with a diversity of top level like-minded players.”

A central midfielder who likes to act as the conduit between the defense and attack, Fleming has been around the world with various levels of the Canadian youth setup. Along with last fall’s U17 effort, she played in the U17 and U20 World Cups in 2014, not to mention appearances in friendlies for the full setup.

She’s been extremely grateful for the experience and how it has improved her game.

“My teammates are such a big part of the experience and have helped me develop even more desire to compete for my country and my overall love for the sport of soccer,” Fleming said. “I think constantly being challenged has brought me outside my comfort zone and forced me to really push myself as a player and to know that I can always be better.”

Fleming is the sixth verbal commitment to UCLA for the class of 2016.

A trip to in state program Eastern Washington and a chat with the coaching staff convinced Megan Spataro that this was the right step for her playing career.

“I made the decision to commit to Eastern Washington University after visiting campus and meeting with coach [Chad] Bodnar and coach [Max] Weber,” Spataro told TopDrawerSoccer.com. “As new coaches for Eastern, I could tell right away that they were enthusiastic, knowledgeable, and ready to build a great soccer program. They have the type of passion and dedication that I was looking for in a coaching staff.”

Spataro sensed a strong feeling of optimism around the staff under head coach Bodnar, who just completed his first season at the helm.

“It is a very exciting time for EWU’s soccer program and I can’t wait to be part of their team and back line,” Spataro said. “I also loved the atmosphere of EWU’s campus; it is a smaller school with a big campus feel and that really appealed to me.”

Midfielder Lauren Ellis (Charlotte Soccer Academy) committed to Louisville for the class of 2016.

Goalkeeper Kelly DiGregorio (Alberston SC) committed to Manhattan for the class of 2015.