When it came to picking the destination where she’d continue her playing career, Auburn had a strong, all around appeal to forward Kristen Dodson. 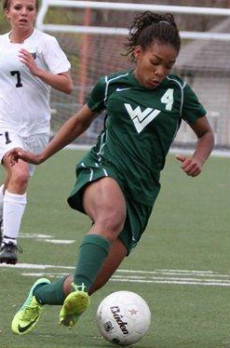 “I loved everything about Auburn,” she told TopDrawerSoccer.com. “Auburn is an excellent university academically, and the soccer program is top of the line. On my visit the coaches and players made me feel welcome. Overall, it was just the perfect fit for me as a student and an athlete.”

A standout for Sockers FC in the Midwest, Dodson is a quality attacking player who likes running at opponents and challenging defenders one on one. On the field, she thinks it will be an easy transition to make regarding how Auburn likes to play.

“I feel like I fit into their style of play very well,” she said. “Also, the way they treat their players is amazing. There are so many different people there to help you both academically and athletically. They really want you to succeed in everything you do, which is one of the significant reasons I chose the school.”

Sealing the deal was the school itself, with an easy-to-access campus and a layout that seemed very accessible.

“I immediately fell in love with the campus,” she said. “It was incredibly easy to get around the campus and everything is conveniently located, which is very helpful. In addition, there is so much school spirit and just a good overall vibe on campus, which is what I was looking for.”

Many different players adapt varying strategies when researching and making a decision on what college to attend.

That was the case for Emma Proctor, who sought the feedback of others who had been through the process – and it ultimately helped her make a commitment.

“Whenever I asked someone who had previously chosen a college, I asked how they knew and they always told me they felt as if they were at home,” Proctor told TopDrawerSoccer.com. “As soon as I got to Clemson for the first time, I felt at home. I’m from a small town so Clemson’s environment felt natural to me and I adapted easily. I also love how the whole town supports Clemson.”

Many players pick a school for just the soccer program only, but Proctor liked how strongly the school supported its other teams.

“Athletics are a huge part of Clemson as well as my life,” she said. “I love all sports and I liked how most people I met there did as well.”

While the team’s record has been spotty in recent times, that didn’t scare away the net minder – rather, she sees it as a challenge and wants to help the ACC program move forward.

“These past few seasons Clemson has been rebuilding their program and I want to be a part of that,” she said. “I loved how the team was all about being better than the last game or season or practice, it was inspiring. The girls were also very welcoming and I had a lot in common with them. I want to help improve their program just as much as them.”

Midfielder Kali Sherburne (FC Stars of Massachusetts) committed to Towson for the class of 2013.

Goalkeeper Catherine Schmidt (Carmel United committed to IUPUI for the class of 2014.

Forward Hannah Smith (FC Dallas) committed to Mississippi State for the class of 2014.

Defender Tatum Sellers (Gilbert Arsenal – Arizona) committed to Coker for the class of 2013.

Forward Victoria Andreski (North Carolina Fusion) committed to Clemson for the class of 2013.

Midfielder Avery Calton (Utah Avalanche) committed to BYU for the class of 2013.