The creative fulcrum for San Diego Surf’s U16 ECNL squad, Olivia Erlbeck knew that Notre Dame was the right fit for her after making an unofficial visit earlier this fall. 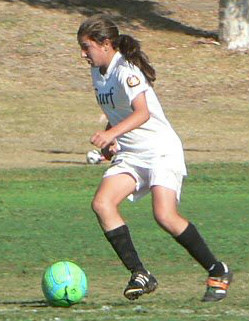 Plenty of aspects of the school appealed to her: the campus, athletic facilities, classroom opportunities. But the way the team plays, as she saw in a 1-0 win over Syracuse a few weeks ago, helped convince her to commit to a program so far from her native San Diego.

“The style of play that coach Randy Waldrum is committed to is where I feel I will have the greatest impact transitioning from club to college soccer,” Erlbeck told TopDrawerSoccer.com. “Possession play, creative play and attacking play are all part of what I saw when I watched the team perform. Every year our San Diego Surf club team has been competing for a national championship in ECNL play and I look forward to competing for the national collegiate championship for Notre Dame. The players at Notre Dame are all committed to the goal of wining the national championship, which is evident in the culture that coach Waldrum has created.”

The program’s recent switch to its new conference was another aspect of the school that appealed to Erlbeck.

“This year is the first year that Notre Dame is playing in the ACC and that really is an exciting change,” she said. “Playing what is probably the best and broadest conference, it is exciting to think that I will be matched up against the best players and teams every game. That difficult and demanding regular season will undoubtedly be great preparation for the post season and the drive for the national championship.”

A member of the U.S. U17 Women’s National Team player pool, while she didn’t make the final cut for the U17 World Cup qualifying squad set to begin player later this month, she thinks that she can reach her full potential under the Irish coaching staff.

“In addition, coach Waldrum is the coach of the U23 WNT, which I believe will help me get to the level of a player that will be playing at the national team level,” Erlbeck said. “His knowledge and experience with that team and working with international athletes will be helpful as he helps mold me into a higher caliber player, ready for international play. I welcome his experience and want him to challenge me as an athlete on a daily basis.”

Walking into the search process, Erlbeck did have her reservations about being so far from home, but the current members of the team helped her overcome that hesitation.

“The distance from home was my one concern, but as I saw that most of the players on the team currently came from distant places, coupled with the family environment and the close vicinity of the dorms, campus, practice facilities and stadium all gave me the feeling that I could grow both as a student and an athlete in the Notre Dame environment,” she said.

Midfielder Jayne Maccio (Connecticut FC) committed to Colgate for the class of 2015.

Defender Jasmine Wright (Maryland United FC) committed to Virginia for the class of 2015.

Defender Madison Fulp (Lonestar SC) committed to Louisiana Lafayette(w) for the class of 2015.

Defender Paige Kozlowski (Penn Fusion) committed to Massachusetts for the class of 2015.

Forward Brielle Leon (Desert United) committed to Michigan State for the class of 2014.