Eligible to play for both the United States and Canada, Devon Kerr also plays club soccer on both sides of the border, down in Florida with Magicjacks and up north with Glen Shields FC. 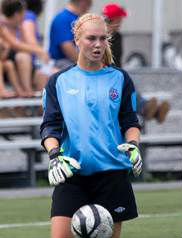 While her international future might be up in the air – U.S. U17 Women’s National Team coach B.J. Snow has been in contact, Kerr has also been in camp with Canada at various youth level – her collegiate future is sorted after her commitment to Ohio State.

“I did my homework, I visited many schools, I compared their needs to my needs,” Kerr told TopDrawerSocccer.com. “OSU soccer was the clear choice in the end because they were so clear with me and what my potential role could be. It certainly helps that Coach Lori Walker is a former goalkeeper.”

Kerr is also confident that Ohio State as a program will continue to be a force on the field, something she hopes to be a part of when she joins in a few years.

And while soccer is always a big part of things, off the field she was also impressed with what the school had to offer.

“I was overwhelmed by how comfortable I felt as I toured the campus,” Kerr said. “The people were so friendly. The amount of OSU pride that surrounded you as you walked through was huge. I wanted to be part of that.”

It never comes as a huge shock to see Georgia snap up some of the best local talent the state has to offer.

The latest is attacking midfielder Sydney Shultis, who was pulled to the in state program mostly due to the coaches – and a little help from an older sister, who currently plays there.

“I decided to commit to UGA because I love the coaching staff: Steve Holeman, Dan Blank, and Robin Confer,” Shultis told TopDrawerSoccer.com. “They came to almost all of my games and really showed me a lot of interest. I also got a lot of input from my sister Carli, who had nothing but positive things to say about the coaching staff, school, and soccer program.”

The Bulldogs’ success on the field was also a draw.

“UGA is a big time school with a big time soccer tradition,” she said. “The facilities are amazing, and the fan support is second to none. I've always wanted to play at a big SEC school, and I feel that UGA is on the rise to doing big things in the near future and I want to be a part of it.”

Ties to current NC State assistant coach Mike Barroqueiro ultimately led Kayla Saager to the ACC program. After a positive visit with Barroqueiro when he was a head coach at Iona(w), it caught her eye when he moved to NC State at the end of 2012.

It didn’t take long for her to see that the Wolfpack would be a good home down the road for the forward from Long Island.

“Since I was little I always wanted to be the best, just like everyone else does, and to do that you have to play with the best and against the best and playing at NC State in the best conference there is, the ACC, I will be doing just that,” she told TopDrawerSoccer.com.

She also took notice of the aspirations of new head coach Tim Santoro, who took over the head coach position on Nov. 30, 2012, and hopes to be a part of making that a reality.

“What I like about the soccer program is how NC State rededicated themselves to become a winning program and a force to be reckoned with by bringing in coach Santoro and coach Barroqueiro and to one day bring a national championship to NC State,” Saager said.

Midfielder Brianna Visalli (Central Valley SA) committed to Pepperdine for the class of 2014.

Midfielder Blair Thorpe (Dallas Sting) committed to SMU for the class of 2015.

Midfielder Jessica Schmidt (Sockers FC) committed to DePaul for the class of 2014.

Forward Kayla Murphy (SWISA) committed to Indiana for the class of 2014.

Defender Sasha Stinson (Lonestar SC) committed to Iowa State for the class of 2014.

Midfielder Emma Heckendorn (Dallas Sting) committed to Notre Dame for the class of 2014.