For Jane Labadie, an unselfish player who is always looking for find open teammates, Western Michigan emerged as the clear choice for her during the recruiting process. 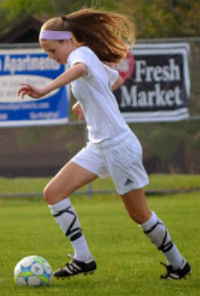 “I decided to commit to Western Michigan because this was the only school that felt right,” Labadie told TopDrawerSoccer.com. “The coach and his style of coaching is what I like and this is the one school that I can actually see myself playing at.”

The team’s organization and dedication appealed to her, along with the work they put in off the field.

“I also like that they put a lot of focus into their academics, which is important to me,” she said. “Their team is very good and I'm happy that I get the opportunity to be a part of it.”

Unsure of her academic path, Jane Labadie liked the numerous options of majors she found at Western Michigan.

“I like what academic programs they offer because everything I've thought about doing is offered there,” she said. “The campus is really beautiful and close to home, which means I know the area pretty well already. It's comforting to go somewhere I’m already familiar with.”

I would say I am a creative player. I like to have freedom to do whatever I want. I'm always looking to set up my teammates or myself. I would say I have good vision.

While her sister stays in state, Grace Labadie’s college choice will see her head south to Indiana, a Big Ten women’s program on the rise of late.

“I decided to commit to Indiana because I was really impressed with everything they had to offer,” Labadie told TopDrawerSoccer.com. “I loved the campus, the facilities were amazing.”

A creative player with good vision, Labadie excels with freedom on the field. IU’s coaching staff strongly factored in her choice.

“The coaches really impressed me and their soccer program was great,” she said. “I just liked the attitude of the players and staff. Their mindset was great.”

I really enjoyed the campus and all that it had to offer. There are so many resources to help you and I really liked that.

Midfielder Meme Taylor Morgan (PDA) committed to Alabama for the class of 2017.

Forward Erynn Johns (Texas Rush) committed to Army for the class of 2017.

Midfielder Caitlin Sanchez (Eagles SC) committed to Washington(w) for the class of 2017.

Midfielder Daniell Sobelman (FC Wisconsin Eclipse) committed to Marquette for the class of 2015.