The addition of head coach Brian Pensky to Tennessee continues to catch the eye of recruits across the country.

Speedy forward Colleen Gawkins recently made the decision to join the Volunteers in a couple of years because of where she sees the program heading in the SEC under the former Maryland coach.

“Soccer wise, I love the fact that Tennessee is being transformed into a stronger and more competitive program,” Gawkins told TopDrawerSoccer.com. “With Coach Pensky's arrival at Tennessee, I believe this is just the beginning of a super program! There’s no doubt in my mind that UT will be a school to watch in the coming years.” 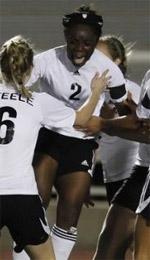 The decision allows for Gawkins to achieve one of her dreams, which was to play in either the ACC or SEC – another factor in her commitment.

But a school renowned for its campus and sporting traditions also tipped the balances in that direction.

“I also love the atmosphere not only at the University of Tennessee, but in Knoxville as well,” she said. “Everyone is very welcoming and positive. I like that UT is a very sports oriented college, whether it be women’s soccer, basketball, or football, it is top quality in every sport.  I like how diverse the campus is, as well as the high quality of the facilities, and more importantly it offers a great academic program with a wide variety of majors.”

Another fast forward has found a home for her college game, as Endaisia Love recently picked UTEP as her next stop in her soccer-playing journey.

A strong sense of camaraderie drew her to Coach Kevin Cross’ program.

“I committed to UTEP because I liked the team and the coaches,” Love told TopDrawerSoccer.com. “The girls appeared to get along really well, it was a real family like atmosphere.

“Also, Coach Cross has been there for a long time and stability is important to me.  I like the direction that he is trying to take the program in.”

Education was also a plus for Love, who already has a strong idea of what kind of an education she hopes to pursue in college.

“UTEP also has a doctoral program for Physical Therapy,” she said. “My goal is to become a doctor of physical therapy. The education that I will be able to receive at UTEP is second to none.”

Kaylyn Smith committed to Virginia Tech for the class of 2014.

Sarah Carter committed to Gonzaga with the class of 2013.

Lindsey Hendon class of 2014 and goalkeeper with the Colorado Rush, committed to Iowa State.

Sydney O'Shaughnessy a defender with the Ohio Premier Eagles committed to Eastern Kentucky for the class of 2014.

Laura Burrill, a goalkeeper for Moline United, committed to Illinois State for the class of 2013.