Like many elite athletes, soccer isn’t the only sport Sydney Squires excels in. Also a hockey player, the forward insists that her experience in that sport helped her on the soccer field.

Playing hockey had little to do with a commitment to Minnesota, however, as Squires became a fan of the school when living in the sate.

“I moved around the country growing up, but was always a Gopher fan from when we lived in the Twin Cities,” Squires told TopDrawerSoccer.com. “As a junior when I started to get recruited and seriously think about college, I visited a number of different schools before I visited the University of Minnesota. After spending time on campus, something hit me and I knew it was the right place for me.”

Soccer was always the heavier focus for Squires, especially playing at the highest level in college – something else she also attains with her commitment.

“My goal was to play Division 1 soccer and to be able to play in a conference like the Big Ten is a dream come true,” she said. “The Gophers have had a lot of success over the last several years and I really like the coaching staff.  They’re high energy and enthusiastic – I like that a lot.”

Off the field, the school had lots to offer the attacker as well. 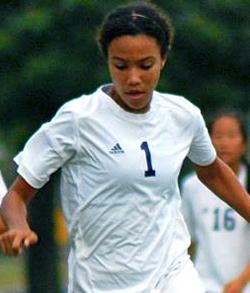 “The U of M has a strong academic reputation and there are many opportunities to get internships/jobs with great companies around the Twin Cities,” she said. “I also wanted to go to a university that had a ton of school spirit. I’ve been to hockey games and football games at the U and love the energy – especially the crazy marching band.”

So what drew Isabelle Delgado from Hawaii to UNLV for this fall? Call it a good feeling.

“I committed because I liked the vibe the people gave me when I visited, and I felt very welcomed,” she told TopDrawerSoccer.com. “The team is really close with one another and the coaching staff is cool.”

College showcases in Vegas helped the outside back draw the attention of the program, as well as trips to the Far West Regionals and San Diego’s Surf Cup. A strong soccer program wasn’t the only perk that drew her as well.

“It's a very open campus and there are lots things to participate in,” Delgado said.

Bethesda SC defender Sydney Calas has committed to Brown for the fall of 2013.

Forward Isabelle Latour, from Bethesda SC, committed to Towson for the fall of 2013.

Defender Erin Boudreau, from Connecticut FC, committed to George Washington for the fall of 2013.

Midfielder Ashley Whited, from Virginia Rush, committed to Radford for the fall of 2013.

Cali Hutson, from McLean Youth Soccer, committed to Tennessee for the fall of 2013.

Midfielder Natalie Krygier, from the Michigan Hawks, committed to Connecticut for the fall of 2013.

Forward Aubrey Krahn, from Lake Country United, committed to Milwaukee-Wisconsin for the fall of 2013.

Forward Abby Jones, from Birmingham United SA, committed to Clemson for the fall of 2013.

Defender Lynsey Hromatko, from Mustang SC, committed to California for the fall of 2013.