A speedy forward who can distribute the ball as well as score, Paige Serwold isn’t going very far from home when she starts her collegiate career at Washington(w). 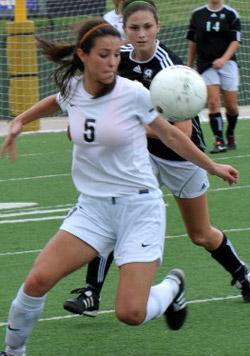 She made her commitment just under a year ago, and it’s been the realization of a dream for her.

“I’ve wanted to go to UW as long as I can remember,” she wrote TopDrawerSoccer.com in an email. “I grew up in a Husky home and it has always been my number 1 [choice]. I am so excited for this opportunity!”

There were many things that appealed to her about the choice – as a native of Washington state, it would mean attending a large program, competing in the Pac 12, all without being too far away from home.

But also standing out to her about the program was the coaching staff.

“I love the coaches,” she said. “Lesle [Gallimore], Jim [Thomas] and Amy [Griffin] are awesome. They really care about their players on an academic level as well on the field.”

A target forward for her club team, Stephanie Martini’s visit to Nevada helped seal the deal as she made her decision to commit to play for their soccer program.

“Originally, I had my heart completely set on another school, but after my visit to Nevada, I realized it was an opportunity I absolutely could not let pass by,” she wrote TopDrawerSoccer.com in an email. “In thinking about it, I realized that Nevada was 100% the best option because it has everything I value in a school-- crazy school spirit, a great soccer program, a huge variety of majors, and it's far from home but close enough so my family can watch me play.”

The soccer team’s coaching staff really left a mark on her as well after the visit, helping her make the decision.

“My first glimpse of the program came from the coaches, Missy [Price] and Kirk [Nelson],” Martini said. “They invested time to watch me play and really made me feel appreciated. Their values are reflected in the team, and that is what appealed to me most about the program.

“The coaches are gracious, easy to talk to, and offer a wide range of knowledge of the game of soccer. Plus, the girls are really nice and, so far, have been very welcoming.”

Allie Rivers’ family background played a significant role in her decision to verbally commit to play for Oklahoma State.

“Several of my family members are OSU alumni, so I have always been a fan growing up,” she wrote TopDrawerSoccer.com in an email. “With the soccer program's huge success in recent years, it has always been a team that I wanted the opportunity to play for.”

Even if she wasn’t looking to play soccer in college, Rivers said she still would have been looking at OSU as her first choice, given the school’s campus and her admiration for the town of Stillwater, which isn’t too awfully far from her home area of Dallas.

When it came to the team itself, Rivers really liked the style employed by head coach Colin Carmichael, as it reminds her of what she’s played before.

“The coaching staff uses similar tactics and style of play as the coaches that I have been fortunate to play for growing up,” she said. “Watching them play, the team is very hard working, and that really appealed to me the most.”