Girls Commitments: Sticking with a choice 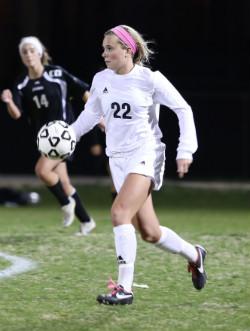 A versatile attacking player for her club side, Parker Roberts didn’t need a lot of convincing to realize that committing to Miami (FL) was the right move for her.

“I decided to commit to Miami because I really like the school as a whole,” she told TopDrawerSoccer.com. “When I made my unofficial visit and was walking around the campus, I just knew it was where I wanted to be. The weather year round is perfect, and I love knowing I can just throw on my soccer shorts with a tee. The campus is amazing and it has a very strong and committed soccer program. Another big factor for me was the fact that Miami plays in the ACC conference. I love knowing I will be playing against some of the best teams and players in the country.”

Originally committed to the program back in March, when Miami changed coaches earlier in the year, she wanted to make sure that sticking with her commitment was the right move.

“I was able to meet with the new coach Mary Frances and the coaching staff in July, and I really liked what they had to offer for the program,” Roberts explained. “I really enjoy their commitment to the team and I felt they would really impact the soccer program in a positive way.”

Roberts considered a slew of other programs in the Big 12 and SEC, but eventually settled on picking the ACC program, for plenty of other reasons besides the soccer team.

“Not only is Miami very strong in their soccer and athletics, but academically it is a top 50 program,” she said. “I really like the smaller class sizes with a smaller student to teacher ratio. I also enjoy Miami having a smaller enrollment of only about 10,000.  I know I will receive a great education while I get to play soccer as well.”

Madeline Gibson made UCSB fans very happy this month when she gave her verbal commitment to the Big West program.

The midfielder with a golden touch from set pieces said that it was, unsurprisingly, the campus and coaching staff that helped her feel right home with the Gauchos.

“I went to camp at UCSB and instantly fell in love with the location,” Gibson told TopDrawerSoccer.com. “It’s about five hours from my home, far enough but still close enough. The coaching staff at Santa Barbara is great and I made a connection with them right away, which made me want to play for them. Knowing they were interested made me feel wanted right back. I had to go somewhere where I was wanted.”

Although the success of UCSB has not been especially noteworthy, Gibson believes there is potential there. And she wants to be part of a group that changes the perception of the program.

“The Gauchos are a solid soccer team,” Gibson added. “They may not be number one but there’s potential on the squad and I want to be a player that helps the team succeed and exceed others expectations.”

With the Isla Vista campus located on the beach, it is hard for recruits to say no to attending school with moderate temperatures and yearlong sunny days.

“It is one of the most beautiful areas in California,” Gibson explained. “The campus is fairly new with even more construction that will enhance it even more. I’ve talked to girls on the team who said they’ve learned to surf the first week living on campus. Why would someone want to be anywhere else?”

The star at Monte Vista High School (Danville, Calif.) also had interest from some standout programs, but she bought into the allure of a good education in a beautiful location.

“I decided that UCSB from an academic side was perfect as well,” Gibson said. “I will be getting a UC education and the school has majors that I want to study. Other schools that has interest in me were California(w), St. Mary’s(w), San Diego State(w), and Wake Forest. It was an extremely difficult decision narrowing the schools down to picking one but I had to weigh all of my options, pros and cons. It just so happened that UCSB was the place with all of my wants and needs and I’m thrilled with the decision I’ve made.”

Defender Ann Elise Hawn (D’Feeters) committed to Oklahoma State for the class of 2016.

Forward Alexandra Lambert (Revolution Empire) committed to Buffalo for the class of 2014.