Caitlin Fryer’s soccer career began when she was four years old, playing in home country of South Africa. She continued after moving to the States in 2004 when her father’s work took her family to New York. 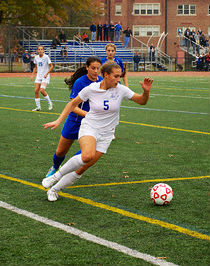 Her career continued to blossom here for Albertson, and in 2009 the South African Football Association invited her to tryout, and her long and winding road took her to the 2010 U17 World Cup.

Her career in the United States will continue in South Florida in the fall of 2015.

“I think Miami fits my personality overall,” Fryer told TopDrawerSoccer.com. “I wanted a school that was near a city and the campus is really nice. I also know the coach very well and I think it's important to have a good relationship with your college coach because you'll be playing for him or her for the next four years of your life. Miami is a great school academically and it's an ACC school, so I know I'm going to be challenged both physically and educationally.”

A hard-working forward on Albertson’s ECNL side, there was plenty that pulled her down south.

“The team has a great reputation and are intense, so I know I will be challenged and grow as a player,” Fryer said. “The team plays in the ACC, so I will be playing other top players from other great ACC schools. I think Mary Frances [Monroe] is a great coach and really understands her players. She wants us to play hard and do our best.”

She is hopeful that as her Division I career begins, her international career can continue to blossom.

“I want to represent South Africa again in the international soccer arena soon as I feel I have become an even better player than when I last played for South Africa,” she said.

Fryer is the sixth commitment to Miami’s 2015 recruiting class.

A self-described intense person, picking a service academy was partially fueled by that aspect of her personality, as she looks to take those characteristics in the classroom and on the field.

She sensed a good vibe at West Point that helped seal her commitment.

“I decided to commit to Army for a variety of reasons, but mainly because of the atmosphere of the school,” Burleigh told TopDrawerSoccer.com. “At my visit, I felt like I could see myself there as a student-athlete, and that I fit. In addition, with West Point's prestigious name, I know that a degree from this university will prepare me for any challenge that I'll face.”

Burleigh enjoyed many other aspects of the school itself, including the campus, athletic facilities and academic opportunities. A friendly group of soccer players also helped.

“Coach Marcia [McDermott], coach Renee [Pilch], coach [Lorraine] Quinn and all the girls are so welcoming and open, so it's not hard to feel right at home,” she said. “Also, the program is looking to make big strides within the women's soccer world, which is something I am excited to be a part of."

The goalkeeper is the first reported verbal commitment to Army for 2015.

A passionate player on the field, Hannah Parrish thrives on the high of playing in goal and making the game-changing save.

Several things drew her commitment to the Waco, Texas-based program at Baylor, including some family ties.

“I chose Baylor because it had been one of my favorite schools from the beginning of the process; my sister goes there and the campus felt alive,” Parrish told TopDrawerSoccer.com. “Baylor soccer team plays a lot like I do: competitive and passionate. They are always giving that extra effort and challenging each other on and off the field to be the best.”

She also knows that the academics offered at Baylor will help her down the road.

“The school itself is a good academic school and offers such a variety of majors and courses; I knew I could find anything I need,” she said. “The campus itself is amazing and everything is in walking distance for the most part.”

Parrish is the sixth commitment to Baylor in the class of 2015.

Forward Sierra Lam (FC Virginia) committed to Liberty for the class of 2016.

Defender Madison Dano (So Cal Blues) committed to Bucknell for the class of 2015.