Girls Commitments: Stocking up for 2016 The 14th ranked player in the class of 2016, Samantha Bruder is now set to join her older sister Allie at USC in a couple of years. 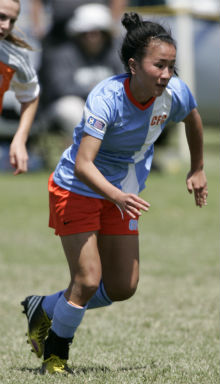 A member of the U.S. U15 and U15 Girls National Team player pool, Bruder did her homework, looking at top schools like Notre Dame, California, North Carolina, Stanford and a number of other programs.

Bruder, who said it was a very “difficult” decision to make, is fresh off playing with Real So Cal’s U17 ECNL squad, where she scored three goals and added seven assists.

A quick, tenacious and technical player from the Northeast United States, a style fit played a decisive role in Mason Worthington’s decision to verbally commit to Lafayette.

“I believe my style of play matches up with Mick [Statham] and Brian [Herr]’s style of possession play, keeping the ball of the ground,” she told TopDrawerSoccer.com. “I decided to commit to Lafayette because the academics are excellent and the soccer within the Patriot League is really strong as well. I believe I will leave Lafayette as a better all-around person. A Lafayette education and soccer career will be a door to tons of new opportunities and experiences.”

“They are both great people and their coaching philosophies attracted me both as a player and person,” she said. “They not only value good soccer, but stress culture, work ethic, and morals, which are so important to me.”

The school itself was gorgeous and had plenty of elements that stood out to the CFC standout.

“I love the small school environment, and when I stepped on the campus, I just knew this was the school for me,” she said. “I appreciate that it’s far enough away from home to allow myself to gain a sense of independence and freedom, but at the same time, is close enough so my family can watch my games and visit. I am really looking forward to becoming a Lafayette Leopard in 2016.”

An unselfish player for Real Colorado, Alyssa Kaiser looked to a school in Oklahoma for her future college home, eventually making her commitment to Tulsa.

“I loved the small campus and the coaches were amazing,” she said. “They were the only coaches that seemed like they really wanted me. That's really what sold me to Tulsa.”

“They always play through the middle, they don't bypass the midfield,” Kaiser said. “The players were all really nice and they made me feel like I was already a part of the team.”

The school was also the ideal size, a particular element of just about every recruit’s college search.

“The size was small and there are not very many students,” she said. “I also liked the academics, because there are not a lot of students so it is would be a lot easier to get help from teachers.”

Goalkeeper Kendall Thomas (Charlotte Soccer Academy) committed to Davidson for the class of 2015.

Defender Alexa Elworthy (FC Stars of Massachusetts) committed to Rhode Island for the class of 2015.

Midfielder Gretchen Cahill (Challenge SC) committed to Rice for the class of 2015.

Defender Sarah Norman (Solar Chelsea) committed to Texas Tech for the class of 2016.

Defender Katelyn Bub (FC Dallas) committed to Houston for the class of 2016.

Midfielder McKenna Doe (Slammers FC) committed to San Diego for the class of 2016.

Midfielder Mikaela Doe (Slammers FC) committed to San Diego for the class of 2016.

Forward Olivia Hernandez (Sereno SC) committed to Arizona State(w) for the class of 2016.