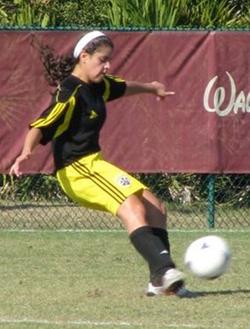 Monica Rios is a possession-oriented player who likes to spend time on the ball from her center midfield spot. Finding a college team that liked to pass the ball was an important aspect to her college search.

It eventually led her to make a commitment to Eastern Kentucky.

“EKU's style of play fits the way I play and I love the game,” Rios told TopDrawerSoccer.com. “At first I never knew that I wanted to go to EKU or even pondered EKU but when I did and I got to tour the school I fell in love with the campus.”

Having an ideal career/major in mind also helped her narrow her options, as the school had the program she was looking for.

“It's not too big or too small and the classroom sizes are perfect for me,” she said. “I want to study Occupational Therapy and the program in EKU is excellent; that is one of the reasons I chose EKU."

The program recently completed its first season under new head coach Melissa Barnes, and is obviously in the process of instituting a unique style of play that caught Rios’ eye.

“I got to watch them play against Morehead State and loved what they were trying to do, pass the ball and worked the ball up the field,” she said, “the Barcelona kind of game and that is the best kind of game to watch.”

Rios also said she got along very well with Barnes and the rest of the coaching staff. And to her, the school looked like it would take care of her academic needs in the classroom.

“I loved sitting in on a class and seeing how the teachers actually knew the students name and could help them,” she said. “The dorms were very nice and the people were all very nice.”

Having made her commitment to Georgia earlier in the year, Josie Roebuck jumped at the chance to join the Bulldogs. A Georgia native, whose two brothers and sister have gone there already, it only seemed natural for her to follow in their footsteps.

And that’s what the quick, athletic center back will do, joining Steve Holeman’s SEC program after sifting through other options at SEC, DII and a couple of other mid major programs.

Next fall, the challenge for her will to be crack Georgia’s starting lineup as a freshman. It’ll be new territory for the club standout who is used to playing every game at the club level.

Goalkeeper Courtney Simpson (FC Bucks) committed to Loyola (MD) for the class of 2014.

Goalkeeper MacKenzie Lee (Midwest United) committed to Northern Illinois for the class of 2015.

Defender Rachael Bellefuil (Carmel United SC) committed to Minnesota for the class of 2015.

Midfielder Hannah Benton (Mandeville SC) committed to Southeastern Louisiana for the class of 2014.

Forward Janae Gonzalez (Blues – NorCal) committed to Santa Clara for the class of 2015.