Girls Commitments: Surfing up the coast A speedy forward who has thrived of late for the San Diego Surf, Santa Clara was always on Alyssa Fiddes’ list of dreams schools. The opportunity to go there eventually fell into place. 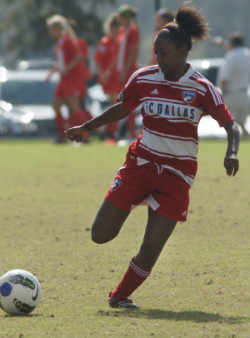 “After exploring several other options for schools, I felt that Santa Clara would be the best fit for me as a student and a player,” she told TopDrawerSoccer.com. “I love how soccer is one of the main sports on campus. The coaching staff and team were super welcoming when I did my unofficial visit and made me feel right at home.”

Head coach Jerry Smith just wrapped up his 27th season with the Broncos, and Fiddes certainly had a high impression of Smith and his assistant coaches, another major draw for her.

“The coaching staff teaches a great style of soccer and it has proven successful for a long time,” she said. “The team is a close knit family and that shows on the field during games. I am very excited to become part of that family. The athletic facilities are amazing and it will be cool to play in the stadium for the home games.”

Fiddes also liked the school’s backdrop, not to mention the education opportunities close to the campus.

“The Santa Clara campus is beautiful and the size of the school is perfect for me,” she said. “It is located in the heart of Silicon Valley and since I plan to major in Business, I think it will be great to be that close to a lot of top companies in the area.”

While a loss in the conference tournament championship prevented Alabama State from grabbing a spot in the NCAA tournament, a 14-7-0 record and SWAC regular season dominance were two pluses from a solid campaign.

The program’s success helped draw the recent commitment of FC Dallas outside back Candice Mitchell.

“I chose ASU because I enjoyed the coaching staff, soccer facilities and the school,” she told TopDrawerSoccer.com. “I liked the diversity on the team but most importantly Coach Smith made me feel like he wanted and needed me more than any other coach I talked to or visited.”

Defender Justine Lynn (Michigan Hawks) committed to Indiana for the class of 2015.

Forward Amber Gustafson (New England FC) committed to Longwood for the class of 2015.

Forward Natalie de Leon (Slammers FC) committed to Navy for the class of 2014.

Defender Paige Davis (Connecticut FC) committed to the College of Charleston for the class of 2015.