The starting center back on an undefeated Crossfire Premier SC squad, Samantha Hiatt looks forward to matchups against the best attackers in the ECNL. 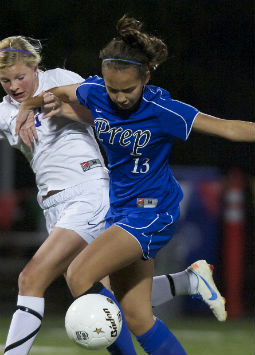 She’ll put her skills to the test in a couple of years in one of the nation’s best collegiate conferences in the country after verbally committing to Boston College.

“I decided to commit to Boston College because it had everything I'm looking for in a school,” she told TopDrawerSoccer.com. “The soccer program has a winning tradition in the best conference, and the school's top-notch academic program is the perfect fit for me as well.”

The Washington state native was eager to jump at the opportunity to live in Boston, and knows that her academic opportunities would be plentiful.

Along with the chance to compete in the ACC, she liked the vibe from the soccer team.

“I loved the winning attitude of the players and the sense of family among them,” Hiatt said. “I also loved Alison Foley and the great coaching staff, and the idea of playing for a team that is focused on competing for a national championship.”

Hiatt is the third add to Boston College's 2016 recruiting class.

A tenacious and tireless working during training and games, New York native Maddy Lowe didn’t wait long to make her verbal commitment, finding the right fit in a Big Ten program a couple of states over.

“Ohio State has all that I am looking for and then some in regards to my academic and athletic needs,” she told TopDrawerSoccer.com. “OSU has so much to offer a student-athlete and the campus is awesome. The academics are so diversified in regards to what they can offer a student. The support that the student-athletes receive is very impressive and I love how they stress the academic side as strongly as they do. The coaching staff was a huge factor for me and I felt that this was a great fit.”

The job Lori Walker has done with the women’s soccer program didn’t escape Lowe’s notice, as she like the environment fostered there.

“The coaches are so supportive of their players and they made me feel at home right from the beginning of the recruiting process,” she said. “It really felt like a family to me each time I was there, and when I had my unofficial visit it felt so right. I loved the coaches and when you see how invested they are in the program, their players, and their development, it motivates you to want to compete for them.”

Lowe is Ohio State's second commitment for the class of 2017, as she'll join club teammate Riley Bowers in Columbus.

Defender Taylor Lambouris (Michigan Hawks) committed to Loyola-Chicago for the class of 2015.

Goalkeeper Jordyn Bloomer (FC Wisconsin Eclipse) committed to Wisconsin for the class of 2016.

Midfielder Emily Langenderfer (Colorado Storm) committed to Boston College for the class of 2016.

Defender Cheyenne Shorts (Colorado Storm) committed to Denver for the class of 2016.