A strong first impression at Texas laid the groundwork for Atupele Mshana’s eventual commitment to the Austin program. 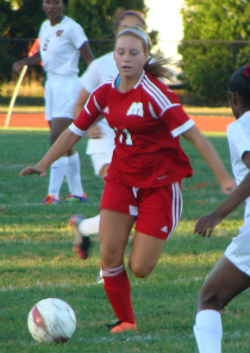 One of the first colleges she visited during the recruiting search, head coach Angely Kelly and the rest of her staff made a significant impact on Mshana, and the hope for bright things to come for the program certainly helped.

“As part of Big 12 Conference, Texas has always competed well but never really made a consistent impact at the top of the conference or in the NCAA Tournaments,” Mshana said. “With Coach Ange now being in charge, there is a strong feeling and belief that the program is about to take off. Coach Ange has history and track record to do just that. I wanted to be a critical part of that takeoff. I like the way they have set the program and plans they have for the future development of the soccer program to be a top level program in the nation.”

The location of the program, not too far from her Dallas Metroplex home, also appealed to her.

“The school is well situated within the city of Austin, has a big campus feeling with a small community setting,” she said. “Everyone feels a part of something within the campus. The academic programs are top-notch, worldwide respected and recognized. With a degree from Texas, you can’t go wrong anywhere in the world.”

A midfielder who likes to play possession soccer, Dylan Burns rattled off plenty of reasons why she elected on picking Manhattan.

“I knew I didn’t want to be far away from home and I was looking for a small school close to the city with strong academics,” she told TopDrawerSoccer.com. “Manhattan was definitely a good fit. I also liked the structure of their academic program and how closely the school supports all the teams with regards to academic success.”

Burns also had certain criteria about her ideal soccer program that she was hoping to find – all Manhattan eventually fit.

“When I was considering schools and soccer programs I knew I wanted to play D1 but I wanted to play in a conference that didn’t take me far away and always traveling,” she said. “Manhattan competes in the MAAC and I liked the schedule and the schools they compete with. In talking with Coach Lawler and his players, there was a level of respect and work ethic that was valued. I went to several games to watch the team and his coaching style. In the end, after meeting the team, visiting the campus and talking with the coach, the decision was really easy for me.”

Defender Charme' Morgan (Dallas Texans) committed to Oklahoma State for the class of 2016.

Forward Stephanie Krouskos (Tophat SC) committed to Virginia for the class of 2014.

Midfielder Jordan Tuttle (YMS) committed to South Florida for the class of 2015.

Defender Rosemarie Boyd (FC Stars of Massachusetts) committed to Penn for the class of 2015.

Forward Hayley Thompson (Los Angeles Premier FC) committed to University of Chicago for the class of 2014.