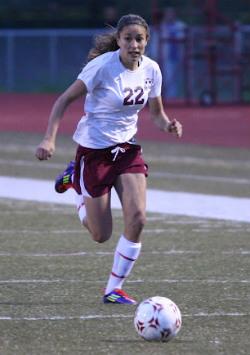 A coaching staff at Northwestern with an ambitious vision continues to catch the eye of recruits, as the program added another talent to its ranks for the class of 2015.

“I decided to commit to Northwestern because of the plans that coach Moynihan and his staff have for the future of the NU soccer program,” she told TopDrawerSoccer.com. “He's a really good coach, with a great reputation, and knows how to develop a player to be the best they can be. The program is definitely on the upward swing and I wanted to be a part of that.”

The current players on the team were quite welcoming to Lovera as well, and the strong chemistry was another draw.

“The team has such a strong bond on and off the field,” she said. “Also when I heard about all of their community service activities, I knew I wanted to a part of that. The coaches all work really well together and create a family environment. They have a passion for the game, this isn't just a job to them, and I really looked for that on my other visits but had trouble seeing that passion. I'm really excited to get to work with them and feel I can impact the team for the better.”

A technically strong player with a lengthy resume of overseas trips for a player her age (Griff has been to both Costa Rica and Germany with the Olympic Development Program), the decision to commit to Yale didn’t seem too difficult for her to make.

“Yale has the perfect mix of top academics and the higher level of Division I soccer that I was looking for,” she told TopDrawerSoccer.com. “I also gave a lot of consideration to some ACC and Big East schools that were recruiting me, and I really enjoyed my visits and meetings with those other coaches. But it then came down to everything that Yale could offer.

“I can look forward to receiving an outstanding education, and I believe the Ivy League as a conference is continuing to get stronger in women’s soccer. From my conversations with the Yale coaches and the time I spent on campus, including an overnight with current players, I knew Yale would be a great fit for me and I knew I was ready to choose Yale over any other school.

On paper, the academics seem like an easy way to influence and land the right recruits, but Griff was also got along well with her future coaches.

“I really felt comfortable with coaches Rudy Meredith and Todd Plourde,” she said. “They have seen me play for the past two years with my NY Rush club team and they really believed I would fit in perfectly with their style of play and what they are trying to achieve on the soccer field. I was really impressed by the fact that coaches Meredith and Plourde are trying to build a strong women’s soccer program that will compete each year for an Ivy League title and hopefully go far in the NCAA tournament. I like the idea that I could be a big part of that.”

An attacker with a lot of pace, Ryan Williams knew a lot about TCU heading into the recruiting process – her sister is a junior there at the moment.

A positive camp experience there continued to build a case for the Colorado native to make the commitment.

“I went to [head coach] Eric [Bell]'s camp in February and liked the instruction that I got and the style of coaching. I had a good understanding of Eric's instruction so I felt like I could learn from him,” she said. “I went back and spent the day with Eric, Ryan Higginbotham, and Kelsey Davis and was so impressed with everything that I saw, from the athletic facilities to the dorms to the student dining hall.”

It wasn’t just the soccer program, either, as plenty of factors off the field helped draw her in.

“The campus is amazing and I just felt like I belonged there,” she said. “There is a huge amount of support for the athletes in the academic center and I got the feeling from them that they would really be there for me in any way that I needed. TCU is a smaller sized school with big school spirit and Ft. Worth is a great town. I'm originally from Texas and a lot of my family is there so I'm really happy about going back.”

Midfielder Sydney Schilling (Central Florida Krush) committed to Elon for the class of 2014.

Goalkeeper Mikki Lewis (Creeks Clash) committed to Troy University for the class of 2014.