A promising and talented midfielder from the prominent Michigan Hawks club side, Zoe Morse was drawn to Virginia by head coach Steven Swanson and the rest of the coaching staff in Charlottesville.

The positive perception of the coaching staff was then augmented by a tremendous experience with the rest of those affiliated with the program.

“Everyone I met at Virginia – coaches, players, and alumni – were so genuine and seemed to really enjoy what they were doing,” Morse told TopDrawerSoccer.com. “On top of that, it is an amazing school academically. I was drawn to the fact that I will be challenged in soccer as well as in my education.”

As for the team itself, Morse noticed a unique blend of camaraderie and an edge to make everyone’s game better.

“The team has the perfect balance of a family feel and a highly competitive environment,” she said. “I was drawn to their style of play and cannot wait to be a part of UVA's program.”

Morse is the fourth player to commit to UVA for the class of 2016.

Since attending a soccer camp at Stanford when she was nine years old, Samantha Tran has been a fan of the women’s team.

Even so, she still wasn’t certain where she wanted to play at the highest level. 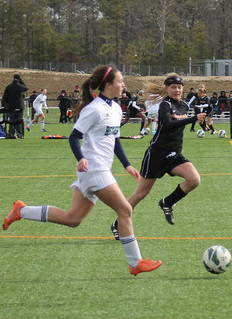 “When I began the recruiting process and had the opportunity to visit multiple schools and talk to several amazing coaches I was still unsure about where I wanted to attend school,” Tran told TopDrawerSoccer.com. “When I visited Stanford again and met with coach Ratcliffe and heard what he had to say, I then realized Stanford is the university where I want to receive an education and play collegiate soccer.”

Tran, an attacking winger/forward on one of the best U15 ECNL teams in the nation, already has eight goals and six assists from just nine club games this year. Her De Anza Force side won the U14 title last summer in Richmond, Va., playing a brand of possession soccer that she’s seen from Stanford – another incentive to make the commitment there.

“Much like my soccer team, De Anza Force 98g, Coach Ratcliffe's soccer philosophy is to play a possession style of game and I enjoy playing possession soccer,” she said.

Last but not least, there was plenty that the school had to offer away from soccer that will set her up for success.

“Personally, I believe Stanford is the perfect blend of what I wanted in a school,” Train said. “Perfect location, perfect size, great academics, and a great student-community atmosphere.”

The forward was named to the ECNL National Finals U14/U15 Best XI last summer and has been called into the U.S. U15 GNT. She is the first verbal commitment for the Cardinal’s 2016 recruiting crop.

Heather Rucci, an attacker from well-known Maryland club Bethesda SC, found that CAA program Delaware had everything she was looking for in a college soccer home.

“I decided to commit to the University of Delaware because I felt like it would be a great fit for me academically and athletically,” Rucci told TopDrawerSoccer.com. “When I stepped on the campus, I just felt like it was the school for me. I really enjoyed the atmosphere. I believe the University of Delaware has the qualities that I need to become very successful as both a player and as an athlete.”

The team’s coaching staff also did its part in convincing the recruit that Delaware was the right place for her.

“Coach Scott [Grzenda], coach Nitan [Soni], and coach [Brian] Sprinkle are all very kind and really challenge their girls to reach their full potential,” Rucci explained. “They inspire them to work hard. I really like that. The girls were all very nice and funny too. When I went on my unofficial overnight visit, I could tell that the team was like a family. The girls shared a close bond with one another and with the coaches. I wanted to be a part of that bond and have the chance to experience it. They also have great facilities."

Midfielder McKenna Klodnick (Cleveland Kickers) committed to Marshall for the class of 2014.

Midfielder Carissa Sanchez (Sunrise SC) committed to Rider for the class of 2014.

Forward Maura Aman (FC Virginia) committed to UCF for the class of 2015.

Forward Sydney Brackett (FC Stars of Massachusetts) committed to Syracuse for the class of 2016.