It’s never a surprise to see a player with a youth national team player decide to make an early commitment to North Carolina, and Anson Dorrance picks up another talented piece from the Midwest.

Last week, Dorian Bailey became the third player from the class of 2015 to give her verbal commitment to Anson Dorrance and North Carolina. 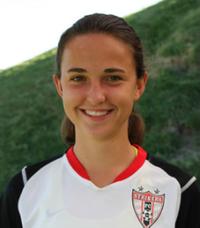 The skillful, dynamic attacker from Sporting Blue Valley has enjoyed a pretty spectacular start to 2013 with appearances at the U.S. U17 Women’s National Team camp in Chula Vista last month and a call-up to the trip to Costa Rica for this month.

In between, she gave her word to the Tar Heels.

“I think the deciding factor was their strong tradition of developing national team players,” Bailey told TopDrawerSoccer.com about why she picked UNC. “I want to play on the full national team and I felt like I would have the best shot of achieving that at UNC, especially in their competitive environment that challenges players everyday.”

Bailey has made her mark at the club level as a catalyst of the Sporting Blue Valley attack on the wings. With her vision and finesse on the ball, she has shredded her fair share of ECNL defenders, but recently U17 WNT head coach B.J. Snow has tried her at other positions on the field where she has also excelled.

Snow is a fan of versatility from his players, which has helped Bailey carve out a spot on the youth national team and also open Dorrance’s eyes to potentially playing her somewhere else when she arrives in Chapel Hill in two years.

“Well when I visited UNC, coach Dorrance saw me as a flank player who would go at defenders, but he recently found out that I played holding mid and center back at the last national team camp, so we’ll see.”

The budding star also strongly considered UCLA and Virginia before she made her commitment to the Tar Heels.

She joins Kate Morris and Julia Ashley for the 2015 class. Morris and Bailey are on the trip to Costa Rica together, which could open the door for the duo to recruit a couple of other U17 WNT players to join them in Tar Heel blue.

A thorough preparation process can turn the search for the proper program from a chore into a more formulaic process.

That’s how Kayla Hill refers to her experience, and she made a commitment to TCU back in February.

“Early in the recruiting process I made a list of all the requirements I was looking for in the perfect college and soccer program for me. TCU met all my requirements and expectations on paper so when I went to visit TCU in person I knew it was high on my list. After meeting Coach [Eric] Bell face to face and spending the weekend at TCU and it's surrounding community there was no doubt in my mind that this was the place for me.”

It didn’t take long for the quality of the team get through to her and help entice her to make the decision.

“I believe that TCU has a fantastic soccer program that is growing stronger and stronger each year,” she explained. “Coach Eric Bell challenges his players to commit 110% of themselves to every aspect of the TCU Soccer Program. I am excited to work hard and challenge myself at every practice and game.

“Coach Bell breeds a competitive environment in his soccer program that pushes each player to step up and earn their spot on the field each and every day. I crave that type of expectation and challenge and look forward to being part of such a great program.”

Katherine Sasser will get a year’s jump on her future teammate, Kayla Hill, as the California defender is a member of the class of 2014.

Eric Bell was once again a strong reason why Sasser made her choice.

“Coach Eric has a great vision for the program and my goals for what I want out of playing in college lined up with what his goals were for the team,” she said. “I just knew right away I had found the perfect program for me.”

Not only was the soccer team the right fit for her, Sasser found plenty of other things about the school that made it her future destination.

“I really wanted a school with big sports and big school spirit and traditions and I was able to find that at TCU but without the school being too big,” she said. “TCU is a manageable size, has a great academic reputation, smaller class sizes, is in such an awesome city (Fort Worth) and is also near family for me. Add to that the challenge of playing soccer in a tough conference with a talented team and coaching staff, I couldn't imagine being anywhere else but TCU.”

Forward Rebecca Callison (McLean Youth Soccer) committed to Kentucky for the class of 2015.

Midfielder Amanda Garrity (Massapequa SC) committed to Marist for the class of 2014.

Midfielder Dylan Erger (Beach FC – VA) committed to Campbell for the class of 2013.

Midfielder Kristen Brots (Team Chicago) committed to Kent State for the class of 2014.

Defender Rachael Brots (Team Chicago) committed to SIUE for the class of 2014.

Midfielder Shelby Cohen (Kentucky Fire) committed to Louisville for the class of 2014.

Forward Meghan Flynn (McLean Youth Soccer) committed to Villanova for the class of 2014.