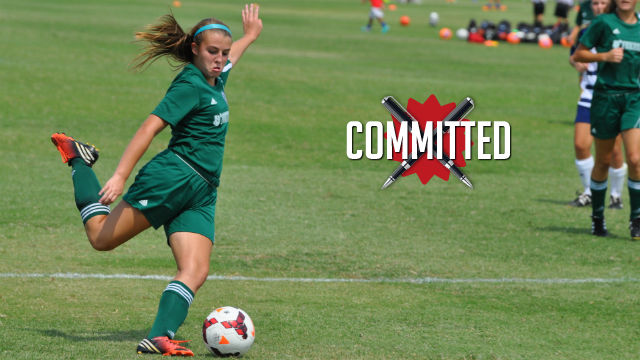 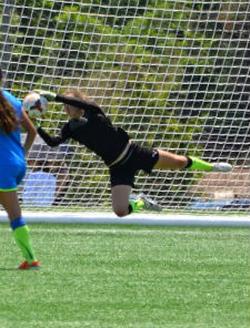 Speed and strength are often the traits that dominate girls club soccer. For Blakeney Latson, touch, technique and soccer IQ have become the pillars of her game for her D’Feeters club.

In 2016, she’ll jump into the Division I ranks with Louisiana Tech after her recent commitment.

“I chose Louisiana Tech primarily because it is a fine university,” Latson told TopDrawerSoccer.com. “I like math and science and am considering an engineering degree. Louisiana Tech is a national research university with a respected engineering school and that was important to me.”

A discussion with head coach Kevin Sherry helped convince Latson that the soccer program was the right fit for her.

“We talked about his goals for the program and the more technically challenging type of soccer he expects his teams to play,” she said. “LA Tech’s program is young, but Coach Sherry already has the team performing above expectations. They just concluded a great season and all of their starters are returning. I hope to do my part to continue that momentum. I believe this team will grab a Conference USA championship and is destined for things beyond that.”

While she had other programs on her radar, the school had a nice fit for her, which helped seal the deal.

“It’s a smaller school in a small town and it just felt like college,” Latson said. “The players I met were so welcoming and everyone seemed to be having such a great time. I am looking forward to joining my future teammates.”

Always working hard to improve her game in goal, Mackenzie Curry’s next playing destination is a Division I mid-major that made quite a splash in the 2014 NCAA tournament.

Curry will swap SoCal for Seattle, which made it to the second round of the NCAA tournament only to come up short on penalty kicks against South Carolina.

“I decided to commit to Seattle because of the combination of the family-like environment and the solid academics offered,” Curry told TopDrawerSoccer.com. “I fell in love with Seattle and knew it was going to be my future home. The coaches and team seemed like such a close family and were so welcoming when I visited.”

Seattle’s domination of the Western Athletic Conference in the past couple of seasons caught her attention about what the team is capable of on the field.

“I really believe that Seattle has a strong soccer program and have shown it by winning their conference and strong showing in the NCAA tournament,” Curry said. “It is a competitive environment but I also loved how close the team was with each other and the coaches because my team has always been my best friends.”

The city of Seattle itself played a role in Curry’s choice.

“The school's downtown location had me hooked,” she said. “The feel of the Seattle environment was a big reason in my decision. I also believe the smaller size of the school will allow me to pursue my academic goals and become successful in all Seattle has to offer.”

Goalkeeper Peyton Bauman (Solar Chelsea SC) committed to Missouri for the class of 2017.

Midfielder Kassidy Hannum (Sunrise SC) committed to Malone for the class of 2015.