A playmaking midfielder, Madeline Marotta found the right mix of school and soccer at TCU. 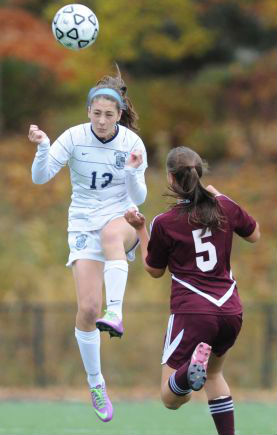 “I decided to commit to TCU because it has the perfect blend of academics and athletics,” she told TopDrawerSoccer.com. “The school's reputation for having high academic standards along with its commitment and support they give their student/athletes is exactly what I was looking for in a college.”

The Sereno SC standout developed a promising relationship with head coach Eric Bell and the rest of his staff, and wanted to be a part of the coach’s goals for the program.

“Coach Bell is striving to take this program to the NCAA tournament and that dedication to excellence is something I want to be a part of,” Marotta said. “Additionally, knowing that TCU has yet to make the NCAA tournament, it provides me the opportunity to help make a difference in this program and be very proud of any accomplishments we, as a team, can make.”

Along with a beautiful campus, Marotta liked the school’s location.

“Fort Worth looks to me like it’s going to be a great college town,” she said. “But most of all, I think that I will get a great education at TCU that will help me get a job when I graduate.”

A friendly campus and positive visit can go a long way in drawing the interest of potential student athletes. And it was clear that Paige Davis took a liking to the College of Charleston very quickly.

“I decided to commit to the College of Charleston because I really loved the location, coaches, players and the school as a whole,” she said. “Everyone I met when I visited was so welcoming and friendly, the city was amazing and the campus was perfect for me. I knew when I was there that it was the right place for me.”

"The fact CofC moved into the CAA was also helpful because the CAA is a great conference,” Davis said. “Coach Christian and Coach Tracy both shared their vision of the soccer program, and I wanted to be a part of the future success of the team."

Academically, the school also had her intended major, Exercise Science and Human Performance, another huge aspect to her college search.

Defender Jacqueline Simeone (IMG Academy) committed to Williams for the class of 2014.

Defender Grace Sponaugle (Utah Avalanche) committed to Oregon for the class of 2015.