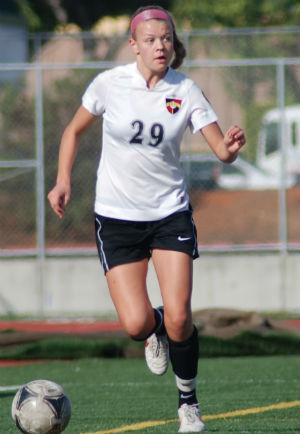 A technical player with versatility – Haskel can play in defense or the midfield – the decision to make a commitment to Northwestern was fueled by discovering the right fit.

“Northwestern is the perfect school for me,” she told TopDrawerSoccer.com. “It offers one of the finest educations in the country, has great academic support for its student athletes, the Chicago area is great, and they have a great coaching staff. I really liked the girls when I visited, and all in all everything felt really comfortable. I feel like I am getting an Ivy type of education while playing great soccer in the Big Ten.”

Along with the all around fit that she noticed, the on the field part of it stood out because Haskel liked the team’s style of play and thought that she wouldn’t have too much trouble adjusting to the coaching staff’s approach.

“Coming to play for Coach [Michael] Moynihan and his long time staff was an important factor in my decision,” she said. “He has an impressive winning record, and also likes an attacking, possession, technical game. I am joining a really impressive recruiting class from top clubs, so I am excited to meet my future teammates. This is a great soccer opportunity with quality coaches and teammates at a truly great university.”

Unsurprisingly, Jenny Plummer had plenty of good things to say about her future collegiate home.

“Seattle just seems like the perfect fit for me in many areas,” she told TopDrawerSoccer.com. “I love the city, the location, and the size of the school. Seattle is a great soccer town and I feel SU is an up and coming Division I soccer program.

“I really like head coach Julie Woodward and associate head coach Rich Schreiner. They have made me feel very welcome and they had a clear vision of how my skills and style of play fits with their team. I was also very impressed with the girls already on the team as well as the caliber of players I have read about who are also joining the program.”

Plummer really liked not only the team itself, but also the support she saw at the school available to the soccer program.

“I can't wait to play on the natural grass of Championship Field and the training facilities and training staff seemed top notch,” she said. “Knowing that the coaches see my potential and that they are interested in developing me as a player was also really important to me. Playing in the WAC will be exciting because I will be able to travel to my hometown of Denver where my family and friends can cheer for the Redhawks when we play DU.”

Forward Alleandra Watt (Pride SC) committed to Texas A&M for the class of 2015.

Defender Ashley Candeletti (Matchfit Academy) committed to George Mason for the class of 2014.

Midfielder Betsy Brandon (Colorado Rush) committed to Virginia for the class of 2015.

Defender Jessica Udovich (Washington Premier FC) committed to Washington for the class of 2015.

Defender Jessi Hartzler (Sporting Kansas City) committed to Arkansas for the class of 2014.

Midfielder Katerina Weikert (OP Eagles) committed to Cornell for the class of 2014.