Girls Commitments: To be a Rebel A physical center back for her St. Louis Scott Gallagher club side, Madison Meador’s decision to commit to an SEC squad fell largely on the shoulders of her perception for the coaching staff. 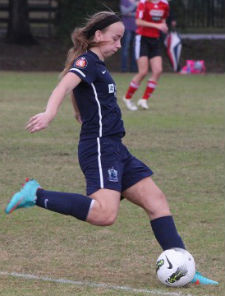 “Coaches Matt, Becky, and Rob were instrumental in my decision to choose Ole Miss,” Meador told TopDrawerSoccer.com. “I admire, not only the values they possess on and off the field, but also, the ones they instill in their players. Their goal of being one of the top teams in the SEC each year will challenge me as a player.”

Meador also took to the team’s style of play, saying the possession game Ole Miss likes to play is something she liked. Last fall’s banner year was another reason.

“They are coming off one of the most successful seasons in program history, both on and off the field - which include school record for most wins, a second round appearance in the NCAA tournament, and posting the highest GPA among all sports teams at Ole Miss,” she said. “I'm excited to have the opportunity to potentially become part of that history. I also enjoyed spending time with the girls. They were very welcoming and seemed to have a nice balance between family, school and soccer.”

It wasn’t just about the soccer program either that made Mississippi appealing.

“The size, location, and sense of community support were priorities in my decision,” she said. “The facilities and resources available to students and athletes will be an integral piece to my growth as a student athlete. The campus itself is extremely beautiful. The town's history, culture, and character give that tight knit family feeling I'm excited to be a part of.”

I would describe myself as a strong, attacking outside back. I have a good field sense, and my ball striking is probably one of my best skills. I enjoy the defensive part of my position, but really love being able to get forward in the attack, and sending through balls and crosses into the box, and even taking some shots myself.

An attacking outside back, Cal Poly had everything that Chelsea Barry was searching for in a college program.

“I committed to Cal Poly for several reasons,” she told TopDrawerSoccer.com. “I was looking for a school where I could get a great education while also having an opportunity to be an impact player in the program. Cal Poly gave me both of these things, and also is in an ideal setting - near the beach, and just close enough to home. San Luis Obispo is also such a great college town, with such strong support for the school. I look forward to spending four years with the coaching staff, and the awesome girls I have already met from the team. I guess you could say it just felt like a perfect fit.”

Head coach Alex Crozier and the rest of the staff provided an attractive environment for Barry to join.

“The coaching staff is so great, and I have always felt very comfortable around them, and the players that I met at camp,” she said. “They are really down to earth, while maintaining a great work ethic, and a strong commitment to improving the program and winning. I also felt that their style of play, and the play in the Big West conference suited me best.”

Barry is the first commitment to Cal Poly for 2015.

Defender Janessa Fowler committed to Montana for the class of 2015.

Defender Julia Rufe (Harleysville SC) committed to La Salle for the class of 2014.

Defender Jenna Staudt (Vardar) committed to Georgetown for the class of 2015.

Forward Mimi Asom (Dallas Sting) committed to Stanford for the class of 2015.

Midfielder Jenna Sayers (New Jersey Rush) committed to Rutgers for the class of 2016.

Midfielder Emma Heckendorn (Dallas Sting) committed to TCU for the class of 2014.