Over the past two years, Civana Kuhlmann has become a fixture in the U.S. youth player pool.

Included as one of two players born in 1999 on the U.S. U17 WNT roster for last fall’s CONCACAF qualifying tournament, Kuhlmann is set to be a fixture of the U17s for the 2016 World Cup squad. 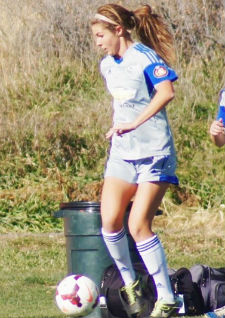 A standout goal scorer at the club level for Colorado Rush, she’s settled on her college choice, and she’ll head west to Palo Alto in 2017.

“Stanford is the perfect fit for me because of the great academic tradition and their successful soccer program,” Kuhlmann told TopDrawerSoccer.com.

An attacking threat with the ball at her feet, Kuhlmann is quick, elusive, powerful, good on the ball, and has a cannon for a shot. Head coach Paul Ratcliffe’s program had everything she was looking for in a DI program.

“I am really impressed with the overall culture,” Kuhlmann explained. “I think this points toward their coaching staff's leadership along with the talent and quality of personnel throughout their roster. The character of the players made a big impact on me. They showed a great amount of accountability in their work and care for each other.”

Of course, having the chance to pursue academic options at such a prestigious school was another powerful factor.

“The reputation of such a great institution ultimately makes it an honor for me to attend this incredible school, not to mention that it's beautiful,” she said. “The environment at Stanford is a feeling that stuck with me, it was very special. I look forward to achieving my academic goals at a university that is thriving in athletics as well.”

Kuhlmann is the third verbal commitment to Stanford for 2017.

Camryn Dyke, a midfielder who serves as a supply line to her goal-scoring teammate Kuhlmann, also recently committed to a prominent program in the ACC.

Notre Dame will be the next stop for Dyke, a technical midfielder who likes to pass and move in the center of the park, looking to combine and unlock defenses.

“I decided on Notre Dame based on the community I felt from the team and the passionate coaching staff,” she told TopDrawerSoccer.com. “I felt it was a place where I would be able to get better and be pushed to learn new parts of my game. This, paired with the prestigious education at Notre Dame, made it clear to me that I wanted Notre Dame as my home.”

The team’s playing style stood out to Dyke, who was looking for a program that keeps the ball on the ground and plays through the midfield.

“Notre Dame likes to keep the ball and has a history of a strong midfield,” she said. “I look forward to playing in the ACC against some of the best teams in the country throughout the season, and having that experience forces me to push myself and play my very best. I am excited and honored to play for the Fighting Irish with such talented players and tremendous coaching staff.”

Pursuing a faith-based education and the school’s impressive campus were also influential in the process.

“There’s so much history and tradition at Notre Dame and the athletic program is amazing,” she said. “Overall, it’s tough to beat the combination of academics and athletics that Notre Dame offers.”

The Colorado native is the program’s first verbal commitment for the 2017 recruiting class.