Kelsey Thein, highlighted earlier this year on our Recruiting Insider series, got her wish with her college commitment.

The defender from Las Vegas wanted to experience something new in college, and Houston will offer her just that opportunity.

“After visiting the University of Houston it just felt like the right fit both for academics and for soccer,” Thein told TopDrawerSoccer.com. “I'm excited to be able to play for Coach [Chris] Pfau and am impressed with the direction the program is headed under his guidance.” 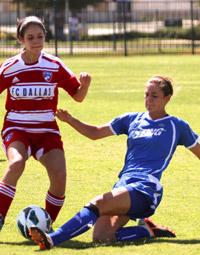 Pfau is 7-7-3 in his first season as the head coach with the Cougars. Beyond the new coach, Houston is also prepping for an upcoming move to the Big East.

“I'm also excited to be joining the program after their move to the Big East,” Thein said. It was exciting to see all the new things being added to the campus as well. I'm looking forward studying and playing at the University of Houston!”

The defender is the first announced commit for the 2014 recruiting class for Houston.

Is Alexandra Nicholas the future starting goalkeeper for the Fighting Irish?

The highly-rated shot stopper can only hope so after making her verbal commitment to Notre Dame for 2014.

I chose Notre Dame because I was looking for a program where I could challenge myself and continue to grow as a player and a person,” she told TopDrawerSoccer.cm. “It is important to me to participate in a top program that would take my technical skills to the next level and help me improve my game. I know that under the expert guidance of the Notre Dame coaching staff, I can continue to develop and become the best goalkeeper I can be.”

While the college search process can be stressful to some, it was an enjoyable one for Nicholas.

“I feel very lucky to have had the opportunity to visit a number of quality colleges and meet with coaches and teams across the country that I have admired and watched as a fan the last few years, she said. “The exposure to different programs, coaching styles and campus environments allowed me to discover more about myself and realize what I wanted to get, and give, to the college I chose.”

While it’s still early for some sophomores, the class of 2015 commitment ranks continued to grow recently, as Dallas Sting midfielder Julie James made the decision to be a Wildcat.

“I committed to Kentucky for a number of reasons,” James told TopDrawerSoccer.com. “The coaching staff and players were welcoming and made me feel valued. Coach Jon Lipsitz and the girls say their team is like a family.  They work hard and play an attacking, but possessive style of soccer.”

Competing in a prominent women’s soccer conference also held strong appeal for her.

“I wanted to play in the SEC because I like the support from the fans and the style of soccer it offers,” she said. “Kentucky Women's Soccer is an [up and coming] program and I am excited to take part of their unique athletic community.”

As far as the school itself, the location and programs on offer weren’t too shabby either.

“The campus itself is really pretty, and Lexington is a neat city,” James said. “It has a highly ranked physical therapy program and a prestigious graduate school…the environment is friendly, and the students seem like they really enjoy attending there.”

Lauren Palmer from the class of 2013, and a defender at Legends FC, committed to Louisiana-Monroe.

Kylie Kukowski, a midfielder at Michigan Football Club, committed to Louisiana-Monroe with the class of 2013.

Jenna Floyd, an outside midfielder for Washington Premier FC, committed to Louisiana-Monroe with the class of 2013.