A fixture in the U.S. U14 Girls National Team over the past year, goalkeeper Hillary Beall dreamt of playing soccer and attending California. Earlier this year, she took one step closer to making that dream a reality, committing to the Pac-12 program. 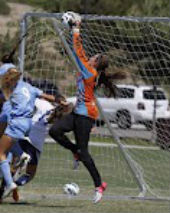 Along with it being a dream to play there, she is eager to help the team turn its ambitions into reality.

“I decided to commit to Cal because Cal not only has a solid Pad-12 soccer program that is building a team to win a national championship, but their academics are the best of the best. Academics were a huge part in my decision and they have what I want. When I visited the campus too I got the chills and fell in love with the school. I was particularly impressed in the coach’s focus on my development not only as a soccer player and student, but also as a leader.”

While the Golden Bears women’s program may not boast the same plaudits as other Pac-12 peers, things are certainly looking promising for head coach Neil McGuire. Having recently secured a Top 5 recruiting class in 2014, Beall is hopeful for the present and future of the program.

Beall also liked the program’s all-around approach to development, aiming to foster both the athlete and student.

“[I liked] the fact that Coach McGuire not only focuses on developing the team in soccer, but also in being able to grow up and be professional young adults and to graduate with a Berkeley degree when the time comes and you have to hang up your soccer cleats,” she said. Cal also has fantastic athletic facilities and coaching support that I can use to advance my opportunity to be able to put on a jersey and continue to advance with the U.S. National Team and represent my country. I also want to focus on my development as a player and to continue to advance with the National team and getting to that next level, training hard, and focusing on my goals.”

Beall is the first commitment to California for the class of 2017.

Turning a program in the ACC into competitive in the conference is no easy task.

But attacker Alexandra Wright believes that head coach Greg Miller and the rest of the coaching staff are up for it, hence her recent commitment to join the program in 2016.

“I decided to commit to Pitt because of the relationship I developed with coach Miller and the other coaches,” she told TopDrawerSoccer.com. “Their philosophy and plans for the future had me wanting to play for them. Furthermore, every time I visited the campus I felt like it was the right place for me both from a soccer and academic standpoint.  I also wanted to be in a more urban college setting and Pitt fit that requirement.”

Her choice also came down to the particular conference Pitt just moved into last year.

“Obviously, playing in the ACC was a big factor in my decision,” Wright said. “With Pitt being a relatively new program in the ACC, I welcomed the opportunity to grow with the team in the conference.  I liked the idea of being a part of a team that is going to improve each year and be extremely competitive in the ACC.  The coaches have the drive and determination to get the program to the top of the ACC.  I like being a part of a program that gets better each year and works hard to meet their goals.”

Wright possesses lofty ambitions away from the game of soccer, and also saw that she would receive opportunity in the classroom to help her draw closer to that goal.

“I want to be a doctor and Pitt provides one of the best possible educations to reach that goal,” she said. “Pitt is one of the top schools in the country and I always felt like it would be a great place to go to school. It has a beautiful campus, but also has a more urban feel to it. Everyone I met on my visits really loved going to school at Pitt and they had nothing but great things to say about the school. Pitt is also close enough to my home that my family can see me play.”

The forward is Pitt’s first reported commitment for 2016.

Midfielder Sarah Brandt (Iowa Rush) committed to Northern Iowa for the class of 2014.

Midfielder Mattina Girardot (Ohio Elite SA) committed to Cincinnati for the class of 2015.

Forward Sara Robertson (Ohio Elite SA) committed to Dayton for the class of 2015.

Defender Kelsey Aaknes (Carlsbad SC) committed to Colorado for the class of 2016.