A member of the U.S. U15 Girls National Team player pool, Amanda Dennis went on her college search with specific criteria in mind. 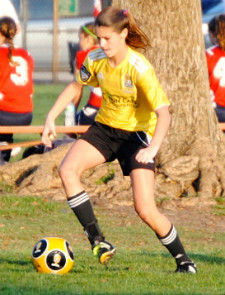 "I wanted a university that offered the full college experience: strong academics, an exciting and competitive soccer program, a large university with a small town feel and an active alumni program,” Dennis told TopDrawerSoccer.com. “For me Penn State has all that and more.”

It’s never surprise to see a recruit pick the Nittany Lions, and Dennis was drawn in part by the coaches guided by the head coach Erica Walsh. A California native, the goalkeeper saw the program up close and in action at last year’s College Cup.

“I could tell there was something special about the coaching staff, the players and the fans as I watched from above Penn State’s players’ bench during the 2012 Women's College Cup semifinals in San Diego,” Dennis said. “This was confirmed when I attended Penn State’s Winter Player ID Camp which gave me an opportunity to get to know the coaching staff, Erica Walsh, Ann Cook and Tim Wassell, firsthand. It only took me one visit to fall in love with Penn State.”

Dennis did the legwork during her search as well, and the school’s grounds certainly were a plus as well.

“I visited many campuses but State College just feels like home,” she said. “From the moment you walk down College Ave, you know how special this place is. People are friendly and welcoming and everyone is so supportive of Penn State."

Taylor Shore’s commitment to Florida Gulf Coast(w) hinged on the opportunity she saw both on the field and in the classroom.

“I decided to commit to Florida Gulf Coast because of the physical therapy program they have as well as the amazing soccer program,” she told TopDrawerSoccer.com. “After attending the College ID camp and touring the school I felt it was the perfect fit for me. The coaches made me feel so comfortable that I could see myself playing there as well as earning my degree. I love that it is far enough away from home to be on my own, but close enough to go home when I want to. Happy parents will be able to come watch me play.”

The way the team played was another draw for her.

“What I like about the soccer program is they play the possession style of soccer that I am used to playing,” she said. “I feel I will be able to contribute on the field right away. I love the coaches. I immediately had a strong connection with them. The team seems like a family. This team has been so successful in such a short period of time. This has a lot to do with the coaching staff as well as the players.”

Goalkeeper Morgan Beans (Gwinnett Soccer Association) committed to Virginia for the class of 2015.

Defender Tyler Johnson (D’Feeters) committed to Stephen F. Austin for the class of 2015.

Goalkeeper Kelsey Kilgore (Richmond Strikers) committed to Virgina(w) for the class of 2014.

Midfielder Kayla McKeon (Dallas Sting) committed to Arkansas for the class of 2016.