The more things change, the more they stay the same.

UCLA is going through a transition with the coaching staff, as former head coach B.J. Snow left in the offseason to take over the U.S. U17 Women’s National Team position. In stepped former UCF coach Amanda Cromwell to pick up just where Snow left off.

The most recent addition to Cromwell’s growing list of recruits is So Cal Blues and U.S. U17 WNT star Anika Rodriguez, who gave her verbal commitment to the Pac-12 power earlier this year. 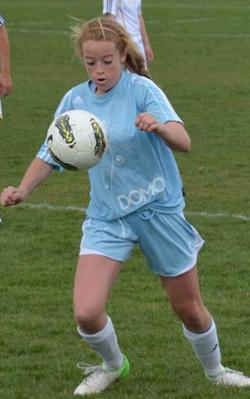 “My family and I are very close, and with UCLA being only 35 minutes away from my home, it makes it so convenient for me to go home on some weekends and to stay connected with my family and that was one of the things I wanted from a school,” Rodriguez told TopDrawerSoccer.com. “As I continued to visit UCLA more, I always got this feeling that I knew that it was the school for me.”

The allure of Westwood is pretty good at keeping the top youth soccer players in Los Angeles close to home for college, as the Bruins have a plethora of youth national team recruits headed that way in the 2013 and 2014 classes. Rodriguez is the first 2015 commit for Cromwell and her staff.

“The atmosphere and the coaches were so welcoming and made me feel right at home,” the dynamic scoring threat continued. “Every time I visited the school, I fell more and more in love with it - from the coaches to the campus.

“Ultimately, it all came down to which school made me the happiest and where I felt I belonged. UCLA gave me both of those feelings.”

Rodriguez said that the coaching change did not have much influence on her choice, as she fell for the school and the playing style.

“As any player would, I was just hoping that the new coach and I would mesh well,” Rodriguez said. “At my first visit with Amanda [Cromwell], I was a little nervous, but once I met her, I knew that the chance in coaching wouldn’t affect my decision at all. Amanda is an outstanding coach and I’m positive that she is going to continue my growth as a player and be able to guide me as I continue to pursue my goals of representing my country.”

The Fighting Illini landed a pair of talented Ratz when younger sister Caroline Ratz gave her verbal commitment to the Big Ten program last week – joining her older sister Katherine who is a 2014 graduate.

“I have always wanted to play soccer in college. Illinois was at the top of my list especially after my sister committed there last year,” Caroline Ratz told TopDrawerSoccer.com. “Seeing firsthand what the university has to offer academically along with an awesome soccer program put it top on my list of colleges.”

The Carmel United standout also had interest from Northwestern, Valparaiso, Loyola(w), and Xavier.

“When I went to the [Illinois] camp and worked side by side with coach [Janet] Rayfield, I knew this was the program for me,” Caroline Ratz said. “Not only is she one of the best coaches in college soccer, she is a great teacher and mentor. I researched the school and immediately love the campus. I know I can be successful academically at Illinois and be my best on the field, too.”

As for joining her sister with the Illini, it’s hard for the younger Ratz to contain her excitement.

“Playing Big Ten soccer at Illinios with my sister Katherine is a dream come true,” Caroline Ratz said. “I am looking forward to seeing her play her first season there next year and joining her in 2015.”

Brittney Porter is heading back to where it all started.

The defensive midfielder from Utah Celtic FC made her verbal commitment to Washington last week, which is where she was born.

“I was born in Washington and lived there until I was six,” Porter told TopDrawerSoccer.com. “I have always loved the trees and weather and visiting my dad’s family that lives up there has always been one of my favorite vacations. I was looking for a school that had a great academic and athletic balance. The soccer and academic aspects of the University of Washington both impressed me a lot. The campus is gorgeous.”

Of course, head coach Lesle Gallimore’s style of play definitely had an influence on the tactically mature teenager.

“My favorite position to play is holding mid, specifically in a possessive style of soccer,” Porter said. “That how my club team plays. The University of Washington recruited me specifically to play that position, and made me feel like I would be a positive contributor to the team beginning my freshman year.”

Washington beat out a few schools to the commitment of the midfielder.  She says it was early in her college search process that she knew Washington was the perfect school for her.

Porter’s path to get ready for college soccer is not the same that most girls will take, as she is playing for a boys club soccer team instead of high school soccer next year.

“I love to play a possession style of soccer, and by forgoing high school I am more able to do this,” Porter said. “My club coach is very involved in the boys’ soccer team, and so by doing this I don’t have to transition between coaching styles and philosophies. This also seemed like the best way to prepare myself for college soccer. My weaknesses have always been primarily my strength and speed, and by playing with the boys, I am forced to learn to play quicker and build up strength.”

Porter is the fourth recruit for the 2015 class for Washington. She joins Kelcie Hedge, Jessica Udovich, and Taylor Sekyra in what is shaping up to be a very strong recruiting class for Gallimore and her staff.