An extremely versatile player for club and country – Malia Berkely plays at a number of spots for both Fairfield Optimist and has been in a number of U.S. youth girls national team camps – there were a slew of reasons that led to her picking a prominent ACC power. 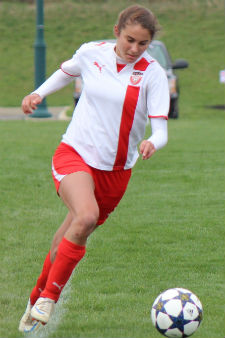 “I think the main thing that set Florida State apart from all other programs was the family-like environment,” Berkely told TopDrawerSoccer.com. “The team was like a family so I know that we will win together and lose together (though hopefully just win together). In addition to that, the coaches also seemed like part of the family. I believe that a good relationship with the coaching staff is very important considering they will be the ones helping you with your future soccer career.”

Berkely also said she liked the program’s success on the field, having appeared at the last three College Cups, and seven overall, not to mention the connections to professional sports that could possibly help her play professionally one day.

She also took note of the way the team played on the field, not just the success.

“During the recruiting process I watched all the schools on my list play their games on TV and I noted their playing style,” Berkely said. “I picked the programs that fit my style of play, and FSU really fits it. They play a very high level of possession-oriented soccer.”

Having visited 11 schools through the recruiting process, with a helping hand from club coach Kurt Fischer, Berkely found that the school had plenty to offer her away from soccer.

“I really loved the campus and the people on the campus,” she said. “It doesn't have to be an athlete or a student or even a visitor, everyone is just genuinely friendly there. Also, everyone seemed to support each other, athlete or not. The people support all sports to the point where the baseball game that was being played during my visit, was completely sold out and apparently sold out a month before the game! Things like that also remind me of a family-like atmosphere so it is nice to know it isn't just like that with the soccer team.

She joins Kristen McFarland and Taylor Hallmon as Florida State commitments for the class of 2016.

Right from the start of her recruiting search, Coastal Carolina was at the top of Heather Piper’s list of ideal college destinations.

“Being located in the South, the weather is perfect and proximity to the beach was a plus,” she told TopDrawerSoccer.com. “Coastal offers a top business school and once I had a chance to visit the school and meet the coaches and train in their environment, I was certain that is where I wanted to commit.”

Interactions with the coaching staff also reinforced that desire, so it was no surprise to see her make her commitment.

“Paul Hogan and his assistant Chris Gnehm are committed to a winning approach,” Piper said. “They are building a program with girls that are not only committed soccer players but also focused on their academics. They took the time to talk to me one on one and made me feel welcome from the start.”

Piper is the first reported commitment for the class of 2015.

Forward Brooke Hartsock (D’Feeters) committed to Mercer for the class of 2015.

Defender Alyah Mitchell (Dallas Texans) committed to Florida International for the class of 2015.

Midfielder Savana Yurick (Beadling SC) committed to Vermont for the class of 2015.

Forward Lexington Magliarditi (Heat FC) committed to Duke for the class of 2016.