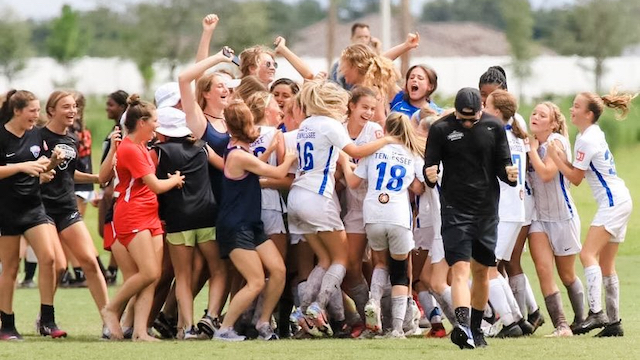 The ECNL playoffs were held in Lakewood Ranch, Florida over the course of the past week. The Florida weather presented a challenge for the organizers, coaches, and players. Despite severely adverse conditions, there were standouts from the playoff games in the national league.

One player stood out from the field though. So Cal Blues’ Ruby Hladek had quite the week in Florida. The BYU-bound midfielder caught an elbow during a playoff game last Thursday. It knocked out one of her front teeth. The ECNL staff and medical team on site reacted quickly and wisely, according to Hladek’s parents. They found the tooth, put it in a ‘Save-a-Tooth’ kit, which saved it. The parents weren’t on site so the Blues team manager rushed Hladek to an oral surgeon who put the knocked out tooth back in place and had to repair a couple more of her teeth that were hanging on by a thread.

Hladek was back on the field two days later playing in the national championship game for the So Cal Blues 02/03 Composite squad! She scored the go-ahead goal as So Cal Blues claimed the title and Hladek gained a story for a lifetime.

Below is a list of the players who were recommended as standouts from the games in Florida. If you would like to recommend a player for the weekly standouts list, please email rankings@topdrawersoccer.com.