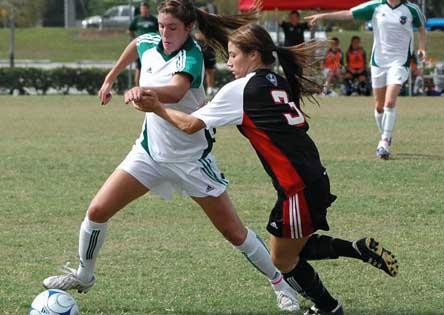 CORAL SPRINGS, FLORIDA – The U.S. Youth Soccer Girls ODP Interregional concluded here Friday with final matches in the 1994 and 1995 age groups. A smaller selection of college coaches was on hand on the day after Thanksgiving, but the play and matches from the youngest two age groups here (the 93s left Thursday) was perhaps the best of the week.

The easterners rallied late behind fantastic goals from Jaclyn DiMartino and Brittany Basinger. Sydney Arestivo nearly gave Region I the late win but Region III goalkeeper Olivia Liebman made a highlight-reel save with her legs.

Hailey Brohaugh scored a terrific goal of her own in the 1st half for Region III, curling a ball directly in from a corner kick. Challenge SC’s Beryl Smith then made it 2-0 with a clever lob of the goalkeeper from 25 yards. 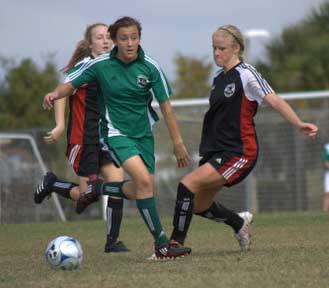 94s compete at ODP Interregionals
Region I got good interlinking play from DiMartino, Basinger and Brittain Dearden, who again showed a great soccer brain, good feet and the ability to hold the ball to gain numbers in attack. Defender Emily Morgan was solid in the back line, and 2nd half fullback Kendal Robino is especially gifted technically.

For Region III, Ariel Kupritz was good again in attack before picking up an injury. Joanna Robertson was very active and creative in midfield. Antoinette Payne was good on the ball and a hard worker, while goalkeepers Liebman and Jill Maloney both had solid shifts between the sticks for Chris Petrucelli’s team.

Nicole Breece opened the scoring for the Midwesterners early in the 2nd half, winning a ball, running in on goal and then taking a pass from Corrine Harris after it had initially been knocked away. Breece then provided the cool 1v1 finish from close range to make it 1-0.

South Dakota’s Karlie Mueller made it 2-0, bulling her way past the goalkeeper before barging the ball into the empty net.

Cincinnati-area product Laura Rose had a good shift, showing good technical speed with her swift runs on the ball. Region II midfielder Crystal Thomas was very active in the center of the park.

Crossfire Premier’s Isabel Farrell was good for Region IV in the 2nd half, showing a lot of technique and the imagination to hit a dangerous pass. Slammers and Region IV goalkeeper Sarah Cox has good reflexes and no lack of bravery, often diving at the feet of attackers in the 1st half and saving from close range.  La Roca defender Brecken Holbrook contributed a vital goalline clearance to help stave off 1st half Region II pressure.