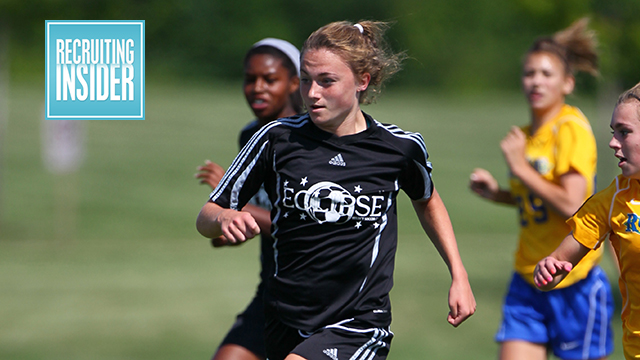 The search for the right college is stressful for many high school athletes, but for elite girls soccer players – that search begins pretty much as soon as they enter high school.

This week, TopDrawerSoccer.com talked to five sophomores about the early recruiting process, making visits, and how to find the right fit. 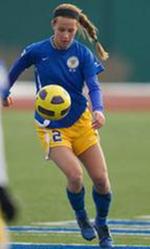 A versatile and hard-working midfielder, Gabby LaMere is searching for the right destination as she goes through the recruiting process.

If there’s one thing that’s certain, it’s been an interesting time for her.

“The recruiting process has been exciting, daunting, fun and most of all a real eye-opening experience because every school has certain things I really like,” she wrote TopDrawerSoccer.com in an email.

While she’s listed as a midfielder, LaMere says that she’s learned to love every spot in the middle of the park, manning either somewhere in the middle or outside on the wings.

She’s made stops at several schools already, including big programs in the SEC, ACC, A10, MAC and Big 10. And although there’s a break in her ECNL schedule ahead, that’s not going to give her a long break as the search continues.

“We have the next few weekends off with no scheduled games, but for me, I'm not really off because I will be making visits,” she said.

And her research will continue, up until later in the year when she’s hoped to settle her future.

This particular Chicagoland native isn’t limiting her search for the right college program.

“It doesn't matter where I play as long as I love the school, the coach and the team,” McGinnis wrote TopDrawerSoccer.com in an email.

She’s started getting on campus to check out schools, but hasn’t made any decisions as she combs through the pile of interested programs.

She’s had a great time visiting a number of schools as well.

“I am looking for a strong academic school with a great coach that takes their job seriously,” she said. “I would also like a team that is close and enjoys being together.”

A tenacious defender for her Carolina Elite side, the recruiting process has been an interesting experience for Savannah McCaskill.

“As a sophomore, the recruiting process has been a challenge,” she wrote TopDrawerSoccer.com in an email. “My club coach, Andrew Fleming, and all of the staff at CESA have played a huge role in this process. Their guidance cannot be thanked enough."

That said, she’s been doing her best to hit the road and learn what exactly she’s looking for in a collegiate soccer program.

“I have been on several visits and have begun narrowing down my selection of colleges. As I talk with coaches and look at programs it is important to me to find the campus where I feel most at home.  I am looking for a coaching style that fits my work ethic, academic offerings that fit my goals as a physical therapist, and a soccer experience where competitive playing time is maximized for me.”

She isn’t trying to stray too far from her native South Carolina as she makes visits and discusses her future plans – which she hopes to have resolved in the not too distant future.

“The East coast is an area that I have focused my visits as this is home for me and I would like to remain in this part of the country,” she said. “There are great programs across the United States, but I also enjoy time with family as well. I hope to find the best college for me through the recruiting process by the fall of 2012, my junior year in high school.”

Where Sara Summers goes, the awards and goals usually follow.

The striker from Dallas Sting U16 ECNL has picked up All-District, USYS ‘Starting XI”, and countless other awards while helping both her club and high school to postseason trophies.

This season, Summers is second on her ECNL team in scoring with four goals and six assists.

With the goals and awards, the attention follows, but it has been strange for the high school sophomore to already start planning for college.

“This whole process has been so crazy,” Summers told TopDrawerSoccer.com. “It's weird already thinking about college when I'm only a sophomore. It's very time consuming but I know it will be worth it when I find the right school.”

Right now, the 16-year-old is keeping her options open and putting in the work to really find the best possible fit.

“Many schools have expressed interest in me but I haven't decided where I'll be attending and I'm in no hurry,” Summers added. “So far, I've been doing my best to keep my options open and keep every school in mind, but over the next few months I'm planning to narrow down the list and see where that takes me.”

The path to college soccer is different for everyone, and for goalkeepers it is even more unique.

“The recruiting process has been exciting for me, but my coaches tell me the process is a bit different for keepers,” Katie Turner told TopDrawerSoccer.com. “It takes longer because coaches want to see if you'll grow more, or get hurt.”

Turner is the starting keeper for LoneStar SC ECNL U16, which the defending national champion in the ECNL for that age group. This season, Turner has picked up 13 shutouts and holds a 0.61 goals against average in conference games.

“I'd say the three most important qualities in a college would be the academics, the coaches, and the team,” Turner added. “Academics always come first for me. I want to study something involving English, so I definitely look to see how the school's English program is before I consider.”

The goalkeeper also mentioned the importance of the coaching style and the interaction off the field with the team as crucial factors in her search.

She said her dream school would be Stanford after finding out one of her idols went there.

“I've been interested in Stanford ever since I did a book report on Julie Foudy in fourth grade and discovered she went there.”