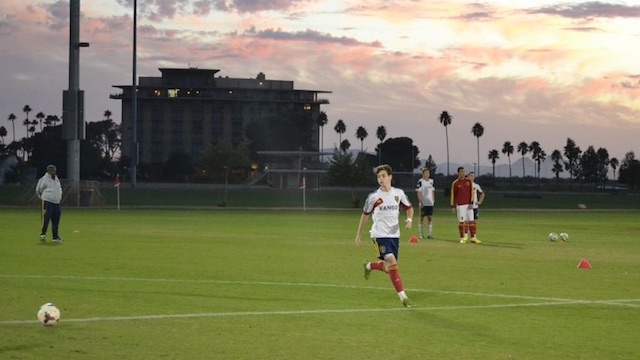 One might expect one of the most robust academy success stories in U.S. history to emanate from one of the traditional geographic halls of power along the coasts. When it comes to player pool and bottom-up resources, there is simply no match for New York and Los Angeles metro areas. After all, those two regions combined account for nearly nine percent of the population.

So the fact that perhaps the nation’s best academy belonged to a club in Utah that ran its Development Academy out of Arizona? Perhaps not many would mark that one down correctly on MLS trivia night.

Since pulling back the curtain on its academy in 2010, Real Salt Lake generated a deserved reputation as a slick developer of young Homegrowns appropriately groomed for the next level. To date they’ve signed double-digit Homegrown players, and at the ongoing U20 CONCACAF World Cup qualifying, four former RSL academy kids made the U.S.’s 20-man roster. That was more than any one club anywhere. One of them, Brooks Lennon, is currently on loan at RSL from Liverpool, where he’s one of the mega-clubs most promising young attacking prospects.

Underneath RSL’s success - they won the 2013 U16 DA national championship - a mighty engine called Grande Sports Academy purred. And now we’re about to see how it does with the cover off.

Earlier this year, U.S. Soccer announced that Grande Sports Academy will join its Development Academy at the U15, U17 and U19 age groups for the 2017-18 season. Grande is the only academy in Canada or the U.S. to join at all three of the DA's most well-heeled age groups at once this year. Out from under the shadow of RSL, Grande Sports Academy’s staffers are itching to unleash the academy’s full potential.

“This is something we’ve been working on for quite a while,” said Miha Kline, Grande Sports Academy’s director of recruiting and business development.

RSL paved the way for the decision by making the choice to leave Arizona. The club announced last year it was moving its academy infrastructure back to Utah to inhabit a $50 million training complex near the stadium. Since its foundation RSL ran its academy operation out of Grande Sports Academy’s palatial 58,000-square-foot complex in Casa Grande, Arizona in the southern part of the state. Built in 2009 and overseen by owner Ron Burks, Grande Sports Academy almost immediately formed a partnership with RSL, allowing the MLS club access to its facilities essentially for free. In the process, it became the first residential soccer academy to be directly associated with an MLS club and sowed the seeds for RSL’s eventual ascendence. RSL didn’t begin covering its operations costs until three years into its partnership.

From that aspect, Grande’s staffers feel ready for the jump on an operational level. While RSL took its players and a chunk of the staff directly tied to its own academy back to Utah, a significant chunk of the existing staff remained. So while it still has to fill out its academy teams, the model that helped make RSL so successful nationally is largely intact.

“We have been doing this for six years essentially, so what we’re doing is just continuing everything we’ve done,” Kline said. “Obviously we’ve brought in a new technical director and will bring new additional staff in to have the best possible technical staff. But everything else, when it comes to support staff, when it comes to director of recruiting, director of marketing, director of college recruitment and personal development, obviously we have a school on campus, we have the director, the counselors, all the hotel staff, all the cleaning for the dorms. That’s all already Grande Sports Academy’s. From that end we’re not starting from scratch.”

Once Grande Sports Academy’s staff knew for certain RSL was leaving, the machinery for its inclusion in the DA cranked into motion. U.S. Soccer doesn’t always share the entirety of its rubric with its academies as to how it grades their suitability for its league, but Grande’s infrastructure made it an easy selection. The academy hired longtime Continental FC Delco director Sean McCafferty to fill its new technical role in January, and he’s now enmeshed in the business of filling out Grande’s three nascent DA teams. Since the players occupying Grande’s facilities these last six years were all RSL’s, the academy has to scout, identify and convince dozens of talented young players to flock to Southern Arizona to play their soccer.

With Grande’s facilities, McCafferty doesn’t think it’ll be a difficult sell. But that hasn’t meant a lack of work in bringing its potential player base up to scratch.

“A lot of scouting. A lot of scouting,” McCafferty said. “We’ve been to a lot of events. We’re hosting our own talent ID camps, which is for players in the USYS and not currently affiliated with an academy group. On May 1 we can hold our tryouts for the Arizona kids to come, and in June once the (Development Academy) season is over, then any academy groups can come attend our tryouts. It’s a systematic approach based on certain restrictions and players’ ability to try out. A lot of scouting, a lot of communicating, a lot of phone calls.

“Our program is unique, so you attract a unique type of player.”

That’s certainly been the case so far. There’s a charter school attached to the prodigious training complex that allows it to attract residency players from around the world, in addition to a hotel and hundreds of acres of land. Current pro players like Lennon, Justen Glad and Jordan Allen all funneled through Grande’s doors, and now the multi-million dollar academy is about to crank up its own Development Academy operation free of MLS for the first time. However that translates at the next level, a grand non-MLS experiment is about to reach its boiling point.

“Parting ways with RSL gives us the ability to focus on our No. 1 goal,” Kline said, “which is providing all these young men great education, great personal development skills as well as equipped them with some of the best skill sets on the field that can take them wherever the future takes them.”