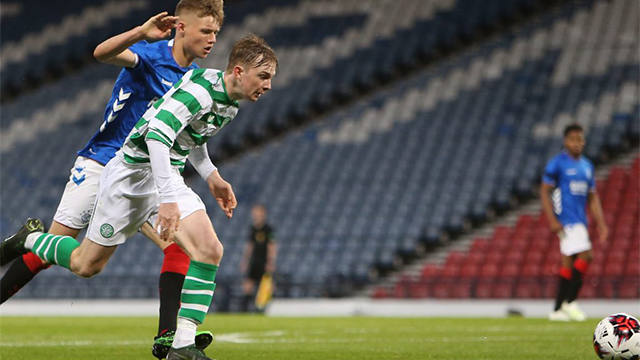 After Cameron Harper’s family moved from Scotland to California when he was a baby, the suggestion of him one day playing for Celtic FC became all the more impossible.

It’s obviously hard enough to make the grade at professional level – forget pursuing a chance at the club his parents supported growing up. But that’s the path that Harper finds himself on nearly two decades later, as the U.S. youth international is currently climbing the ranks at the storied club.

Born in Sacramento to a pair of Celtic FC fans, Harper’s journey to a pro career started off like just about any other soccer-mad youngster. First playing as a toddler with his brother, as he grew older, he became more serious about the game. After playing for some of the top clubs in Southern California – where his family had moved to – he joined Pateadores.

Excelling at Pats under head coach Teddy Chronopoulos earned him a call-up to the U.S. Under-16 Boys’ National Team. While competing at the IMG Cup in 2016, Cameron's father Derek struck up a conversation with a stranger in the stands that was wearing a Celtic kit. That connected Harper with Jonny Burns, a Celtic scout based in Florida whose father played for the club in the 70s and 80s.

The chance meeting in the Florida stands opened the door to a series of eventually successful trials in Glasgow. With Scottish citizenship in hand, Harper joined the club in September 2018 after his junior year of high school. It was quite the drastic shift for Harper, who was one of the top players in his age group in the United States.

“When I moved to Celtic, I had to learn how to deal with all different kinds of pressures,” he recently told topdrawersoccer.com in a phone interview. “Playing against or with guys that, if you have a bad game, they are ready to take your spot… At Celtic you’re expected to win every game that you play. Having that mental toughness, you always need to try to improve and get better because you’re playing in these games where you can’t afford to have off days.”

Given his background, Harper was able to move into an apartment that his family held on to over the years – just in case someone decided to move back. His mother moved with him as well, in an aim to ease the initial transition.

He started out playing with the Celtic Under-18 team during the 2018-19 season. As a slashing wide attacker that likes to run at defenders, there were certainly plenty of challenges to adjust to, both on and off the field.

“When I first kind of came it was really hard to adapt to the cold weather, especially,” Harper said. “[Missing] my friends, being around a different culture, different types of people…So it was just trying to adapt to that. Once you get over that first little hurdle of missing home and missing your friends, it becomes a lot easier because you can really just focus on your soccer.”

Harper, who had been committed to UCLA at one point, initially kept one eye on his college eligibility. He signed a contract that basically covered his expenses, keeping his amateur status intact.

But as this past club season began in particular, Harper’s status in the club continued to rise, and he's now looking to make it as a professional. After a trip to Slovenia with the U.S. youth national team last September, he started getting more consistent runs with the Celtic Reserve team, where he plays for now.

“I took my chance when I got it and played really well when I was there,” he said. “I’ve played really well there, started to get more minutes. I was able to build better relationship with the players because I’m playing, learning their tendencies on the field. Over the past few months I’ve seen myself progress physically, technically, get into the starting eleven recently. I’m going to continue to work hard.”

The hard work has yielded reward for him at the club. Harper’s had opportunities to train with the first team at various points of the season. That’s been an experience he’s tried to soak up and make the most out of.

“You see how high the level is when you go up there, compared with the reserves,” he said. “When you do train, you see how sharp they are on the ball, how fast they think.”

Born in 2001, Harper’s inclusion at various youth national teams with the United States has continued, and he's eligible for the 2021 Under-20 World Cup cycle. And this past January, it opened up a unique opportunity for him.

Called up to a U.S. Under-20 MNT camp in Florida under new head coach Anthony Hudson last month, Harper enjoyed the return to playing under sunny skies. And when the full USMNT relocated its camp from Qatar to Florida as well, it handed a unique chance for the Celtic youngster.

Part of the U20s’ preparation for two matches against Mexico was a scrimmage against the full U.S. team. After a 2-0 defeat versus the USMNT, Harper played well in the first friendly, a 2-0 win against Mexico on January 16. The next day, U.S. manager Gregg Berhalter summoned Harper and FC Dallas forward Dante Sealy to train with the full team.

“You got to see how sharp these first team guys are, how physically fit they are,” Harper said. “It was good to be in that environment, get to talk to Gregg, learn how Gregg wants people to play. It was pretty surreal when I look back on it.”

Now back in Scotland, Harper continues to fight for his place at Celtic. After he finished his school via online courses, he’s put his studies on hold for now, as he focuses on trying to make the grade at the Scottish powerhouse. That alone keeps him busy, as Harper has seen up close what it takes to reach the highest level. In an effort to reach his potential, Harper does as much work as he can on the side, hoping that a first-team chance might come his way if he continues to impress.

He is also hopeful that he gets the call to the U.S. U20s, which seems plausible, provided the next camp is during an international break. And he’s not getting carried away with the success with the U.S. national team.

“When I look back on it, it was definitely something to take back with me, some lessons to learn,” Harper said. “I enjoyed what happened in Florida, but I’m back in Scotland now – head down, keep working hard.”

📺 Watch as Cameron Harper makes it three against Huddersfield Town in today's friendly!