How UCLA landed its star-studded class 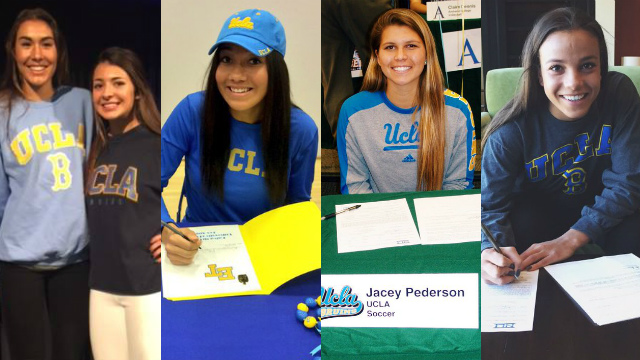 The full impact of any college soccer recruiting class won’t truly be known until players step on the field for the first time. Sometimes it takes a year or two to know the full impact of new recuirts.

Regardless of that, the UCLA women’s soccer program officially secured a class for the record books with its 2016 crop. “With this class, it kind of fits all the lines," UCLA recruiting coordinator and assistant coach Joshua Walters told TopDrawerSoccer. "There are defenders in this class, forwards, midfielders. It reminds me of the class that [former UCLA coaches] B.J. [Snow] and Jill [Ellis] recruited the year that graduated with Sam Mewis and Abby Dahlkemper [in 2014], it’s a class that affects every line.”

Of the six players expected to join on National Signing Day, five of the six are ranked in the Top 30 of the final 2016 Girls IMG Academy 150, with all six in the Top 100. Forward Julia Hernandez, will join for her sophomore year after earning JuCo All-American honors at Eastern Florida State College(w), also adds depth, making it seven players added on Signing Day.

The story of how the Bruins nabbed this impressive crop dates back to the 2015 recruiting class. Forward Anika Rodriguez, a 2015 graduate, was a catalyst for it. A forward on the U.S. U17 WNT during the 2013 qualifying cycle, she decided to commit to UCLA after Amanda Cromwell was hired to take over the program from B.J. Snow that same year.

“Anika was on the same U17 national team with Mallory, Jacey, Marley and the gang,” Walters said. “It started with her, and it started with her desire to come to UCLA, and once Amanda was hired Annika came pretty quickly after that. Her three best friends are Marley, Jacey and Mallory.”

Landing players of those caliber fit UCLA’s recruiting strategy, as they look to land the top talent and then build around that.

“Our approach here has been to go after the top kids early, like all the top recruits going now, so we’re talking the top 10 kids in the country, and recruit those kids from a standpoint of understanding who they are, what they value and what needs we have as a program, and we try to figure that out,” Walters said. “And we go after those kids, so that’s our cornerstone.

“From there, we’re afforded a little bit of time, because once you get past maybe the tenth ranked player in the country, the next group of players are still developing – all these kids are still developing – but typically in the top ten, most of the kids are going to be good college players whether they develop on a fast track or not. It’s the next group that is difficult to nail down, so we’re afford a little opportunity to wait almost a half cycle to recruit those kids and decide what we’re going to do.”

With the U.S. crop settled, Fleming’s commitment came in the fall of 2014. Adding another midfielder was a priority at the time, and like every other top program, UCLA had been recruiting Fleming. After little response, Fleming finally reached out and came to check things out in Southern California.

“She comes down on a visit and she’s on her visit and I ask her, ‘obviously it took you awhile and you weren’t sure if you would consider us or not. What do you think?’,” Walters said. “And she said ‘I was watching a Barcelona game on TV with my dad, and I saw Messi, and Neymar and Suarez, Iniesta, all these guys on the field,’ and she goes ‘well, if they can do it, why can't we do it at UCLA?’ That comment she made to me, I was like, yeah, that’s a player we want. Those kinds of kids that look at it and say I understand I have dreams of greatness beyond college and to get there, I have to play with players who also have those dreams…that helped complete the class.”

The only potential hiccup to the class came after the calendar flipped to 2016. At the NWSL Draft, rumors picked up steam that the U.S. Soccer Federation was angling to sign Pugh and allocate her to the Portland Thorns. It would have been an obvious blow to lose the No. 1 recruit, but the potential and caliber of the rest of the group was still oen of high quality.

Walters and the UCLA staff had to sit back and wait for Pugh’s decision, which eventually resulted in her signing her NLI on February 3.

“For us, it was going to be a family decision [for her],” Walters said. “We didn’t have a say in it either way. You see these NFL guys, NBA guys, in the end it’s their family’s decision. As a family, they sat down and came up with that option of going pro or coming to college. I think in the end Mallory decided she wanted to have a college experience.”

Post Signing Day work remains for the class. Walters said that they are looking to add a goalkeeper or two to reinforce that position. No matter what happens between now and the fall, when UCLA takes the field later in 2016, expectations will be sky high for this extremely talented group.