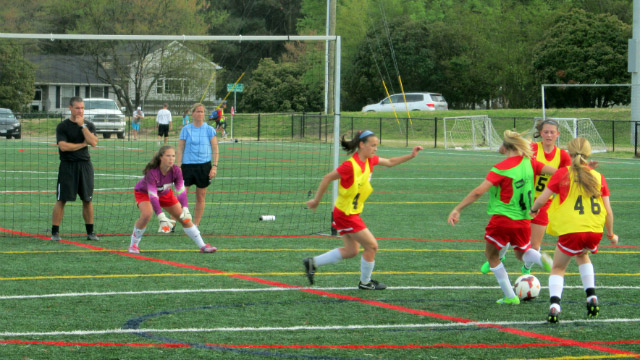 Friday morning’s girls’ matches at the Raleigh id2 camp didn’t disappoint, as the 2001 girls took the turf with Team 6 taking on Team 8. The first showdown of the camp featured impressive young players, who displayed great technical ability and a sound understanding of the game. Team 8 claimed the victory in the fast-paced match, winning by a score of 2-1.

The game began with a brief spell of back-and-forth play for the first 10 minutes, but it was the Yellow team that found the net first. In the 17th minute a dangerous cross into the box from Abby Lee resulted in a composed finish from South Carolinian forward Caroline Conti.

As the first half wore on, the Green side found their rhythm and eventually equalized through the feisty forward, Kacey Lawrence. Although she is one of the smallest players at camp, Lawrence showed great composure to slot a low finish across her body into the far post, beating the keeper to her left.

The game proved to be a fairly even matchup as both sides exchanged chance after chance in their respective attacking thirds. However, the keepers were up to the task and made important saves throughout the match. Net-minders Marzia Josephson and Riley Travis were particularly impressive, displaying great technical skill and sure hands throughout the match. Kaitlyn Parks found herself in goal for the Yellow team during the second half and came up with a phenomenal save, tipping a redirected cross wide of the post.

Despite an exciting second half, the Green team went to take the victory with another Lawrence finish. With just 10 minutes to play, midfielder Gracie Brian played a dangerous cross into the box, which Lawrence linked on to and finished far post.

In the second girls matchup of the day, Team 5 squared off against Team 7. With the rain slowing down, the girls faced humid and slick conditions but again impressed with great technical ability.

The Green side struck first with a chaotic and sloppy goal off of a Destiny Ramirez cross. After a few deflections, the ball eventually ended up in the back of the net.

Despite a slow start, the Yellow team battled back and found the equalizer from Julia Burnell. The central midfielder timed her run to the top of the box perfectly to receive a cross and finish across her body, slotting the slot into the side netting. Burnell proved to be a pain for the Green side to defend all game.

The game continued to be evenly matched, with opportunities on goal coming for both sides. Again, the keepers were impressive, making save after save.

The Green team eventually caught Yellow off guard and found the winning tally. Midfielder Lily Dunbar was able to link up with another dangerous cross and finish soundly to give her side the victory.

“There are a few girls here that are already in the system and have been identified,” said Taliaferro. “The next step is just identifying who else we need in our program and how to help these girls develop as players at the next level.”

The boys took the field at the WRAL Soccer Complex Friday afternoon after training during the morning session. The first game of the evening featured Team 3 taking on Team 4. The match was played mainly in the midfield with very few attacking opportunities being presented.

The Yellow team got off to a great start, dominating possession and the run of play for the first 15 minutes of the 60 minute match. Despite controlling the ball for a good majority of the half, the yellow side was unable to find the back of the net.

Goalkeeper Ethan Wady was solid in net for the Green team during the first 30 minutes of play, easily collecting any crosses and shots on goal.

Yellow started the second half off again dominating possesion, but this time they were ready to strike. Just three minutes into the half, midfielder Hans Schumacher put the Yellow side in-front, finishing a set-piece cross.

After a more competitive run of play in the second half, Yellow almost doubled their lead with nine minutes left in the half after a sloppy giveaway in the 18 by the Green side. Fortunately for Team 4, keeper Ben Aube came up with the save to keep the score at 1-0.

Although Green played a better second 30 minutes, they again struggled to find dangerous services in the box and very rarely had legitimate opportunities on goal.

Playing in the final match off the day at the Raleigh id2 camp were the boys from Team 1 and Team 2. The evenly matched competition proved to be the highest scoring matchup of the day, with Yellow taking the spoils by a score of 3-2.

Despite the Yellow team victory, it was Green who jumped out to the early lead. Forward Naji Elder was able to get onto a through ball, wide to the left side, and juke out a green team defender with a phenomenal step-over move. After losing the defender, Elder laid off a simple ball to Alex Caputo who easily finished.

Goalkeeper Ethan Wady again came up big in net while playing for the Green team. Wady made a phenomenal save in the first half, fully extending and parrying the ball over the net to keep Green in the lead.

However, just before halftime Yellow equalized with an impressive finish from William Burnett. The forward received the ball across his body and made his far post finish look effortless. The half ended with both teams tied at 1-1.

The back and forth pace continued in the second half, providing quite a few quality chances for both sides. Outside backs for both teams played an instrumental role in finding space forward in the 4-3-3 formation.

Just as it looked like the final match of the day was going to end in a draw, Yellow took the lead with 14 minutes left in the game. The impressive-sized midfielder, Cobi Promislow, found his way forward and into the attack. Promislow linked on to a lay-off and buried his shot, putting the Yellow team up 2-1.

The dominating midfielder wasn’t done yet though. With just four minutes remaining in the game, Promislow again buried a shot. Despite an impressive layout from Green’s goalkeeper Ben Aube, Promislow found the side netting and finished off Yellow’s victory.

Both the boys and girls sides will be back in action Saturday afternoon.